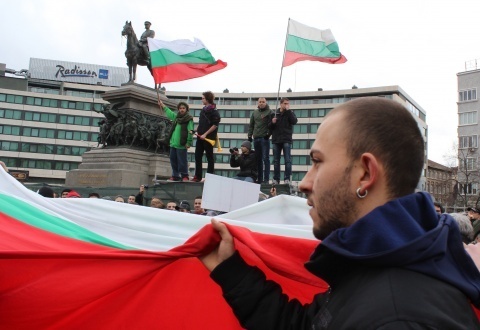 This winter street protests erupted in Bulgaria against the whole political elite and its friends in business. Photo by Sofia Photo Agency

Published in The Turkish Weekly Journal

In early February 2013, thousands of Bulgarian people staged rallies across Bulgaria accusing electricity companies of corruption and abnormally high electricity bills that exceed the people’s incomes. But later mass demonstrations turned into a non-partisan movement against corrupted state system in the country and subsequently spread to more than 30 cities. Protesters mainly demanded changes to the constitution and called for new voting rules. One of the consequences of mass demonstrations was the resignation of the Boyko Borisov’s cabinet. Following these developments, President Rosen Plevneliev appointed a caretaker government and dissolved the parliament in March. The countdown has begun in country for early parliamentary elections, which will be held on May 12. According to the statement of the Bulgaria Central Election Commission, 63 political parties had already registered for the upcoming elections. Besides, eight coalitions formed of 27 political parties in total will be in the competition.

Parties, coalitions and independent candidates will be able to take their position in the new Bulgarian parliament as representatives of people in the excess of 4 per cent threshold in the elections. Yet, the fundamental desire of people who transformed their protests into permanent street occupation is the liquidation of corrupt state structure. In other words, reducing the number of 240-seat National Assembly, the removal of the immunity of members of parliament and the creation of a 50 per cent citizens’ quota for the direct control of state mechanisms by public are the issues brought up into the agenda. Hence, in order to achieve these reforms, the adaption of a new constitution is mandatory.

One of the biggest question marks is if the May 12 elections will be able to bring any significant change. In fact, it seems quite difficult to implement such reforms. Change, as experienced everywhere, is encountering resistance in Bulgaria, too. On the other hand, if reforms cannot to be implemented, no matter which party possess the power; monopolies and corruption will notoriously continue to remain salient in the decision-making echelons.

“Mafia, out of the country!”

Being aware of all these weird relationships, people carry on their protest with a great determination for a more decent life. However, the harsh intervention of the police reflected on media and the raise of the number of people who burned themselves to six escalated the tensions across the country. Boyko Borisov gave an emotional speech, saying that “every drop of blood flowing through the streets is a shame for us”, and then, resigned. Different groups in the country regarded it as a political move. GERB’s application to the Central Electoral Commission for the election of May 12 as the first political party seems to verify this judgment.

Endlessly repeated “Mafia” slogans by demonstrators in the streets of Bulgaria were interpreted as accusations against the country’s three major (Czech origin CEZ and Energo-Pro, and Australian EVN) electricity distribution companies. Judging from a wider perspective, however, this slogan is pointing to one of the country’s basic problems. In other words, “mafia” does not only mean monopoly, but also state institutions and politicians who are aware of corruption and condone it. Mafia, at the same time, stands for profit sharing between businessmen and media bosses. Furthermore, it means courts which do not launch a formal investigation and whose trials are abated due to the lack of evidence.

In short, “mafia” slogans of the public aim at all monopolies, corruption, poverty and all political parties and political system which have ruled the country since the collapse of communism in 1989. In fact, it is a sad summary of Bulgaria’s 24 years of transition process.

Silence among the Turks

The recent upheavals in the country also raised question marks about the stance of the Turks in Bulgaria remaining silent during the process. In fact, the people who have been harshly experiencing the economic problems in the country are the Turks. While unemployment rate across the country is around 20 per cent, it reaches up to 40 per cent in places such as K?rcaali where Turkish population is intense. The average life standard of the Turks who live in villages and engaged with agriculture is three times lower than an average Bulgarian in general. Moreover, since they are minorities, they are exposed to severe discrimination in many areas.

Despite all these, a number of reasons can be mentioned which prevent Turks of Bulgaria from going out to protest. First of all, starting points of protests were the big city centers such as Sofia, Varna, Burgas and Plovdiv. Yet, Turks in Bulgaria rather live in villages and pursue agricultural life. Therefore, they remained far away from the main centers that people organize and come together. Given the fact that the modern communication and collective action instruments are not well-developed in rural areas, the non-existence of Turks in the protests is understandable.

Second reason is the lack of an established culture of protest among the Turks of Bulgaria. The Turks, who have always been regarded as “honest, loyal and hard-working citizens”, took to the streets for the first time between the years 1984-1989 to oppose the policy of forced assimilation carried out by the Jivkov regime. At the end of December 1989, they started non-violent sit-down strikes in Sofia to voice their demands regarding their Turkish names and citizenship rights to be given back to them. “Bulgarian Nationals Name Act” which was enacted on March 5, 1990, put an end to silent rallies. It is well known that Turks in Bulgaria haven’t claimed a right in the streets except for these acts or haven’t had the sufficient political economy ground. This trend has not changed in recent events and Turks of Bulgaria chose to remotely monitor the protests.

According to the surveys conducted during March by various institutions such as ALFA Research, Institute of Modern Politics, National Center for Study of Public Opinion (NZIOM), GERB is expected to be the winner with the voting rates between 22 to 24 per cent while BSP is expected to be the second party with about 17-18 percent of the votes. On the other hand, MRF, the majority of whose members and supporters are composed of the Turks in Bulgaria, is expected to be the third one with a voting rate of 6-7 per cent. The ultra-nationalist ATAKA party, pulling votes through propaganda against Turks in the country and Turkey, holds the possibility of entering the parliament as the fourth one with a voting rate around 5 per cent. According to the same public opinion surveys, only 55-60 percent portion of the voters consider going to the polls, whereas 25 percent of them reported that they wouldn’t vote.

In particular, how MRF is going to end up in this election is quite important. In fact, a new development added new uncertainties into the political participation of Turks in Bulgarian political system, because the Turks of Bulgaria created a new party. The People’s Party for Freedom and Dignity (FDPP), established on December 2012 under the leadership of Kas?m Dal and Korman ?smailov, has entered the election race. On the other hand, MRF in one way conveys the message of “change” to its grassroots by trying to point out that it takes the criticisms into account. In this regard, MRF gave several parliamentary questions to change laws on education in mother tongue and various panels have been held to underline the importance of Turkish language. Moreover, the most significant one was the withdrawal of Ahmet Do?an, who had been the president of the party since its establishment, from the leadership in the latest party congress which was held on January and announced that he would not be a candidate for deputy in the upcoming elections. Even though Do?an’s attitude gave hope, the immediate election of his right hand, L?tfi Mestan, as the new president of MRF, worried people that there wouldn’t be a change in the real sense. For this reason, it can be indicated that Bulgarian Turks have been liberated from the anxiety of existence, however, the struggle to access better conditions at representation continues.

In conclusion, if the election results are shaped in the expected direction, there won’t be a different distribution of parliament than 2009 elections; however, the number of deputies of parties would be changed. Therefore, to what extent the demands of the people will take place in the area of politics continues to be a question mark. The ambiguity regarding the scope of change is binding for MRF as well.