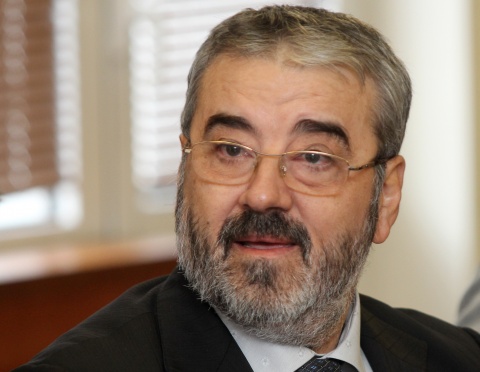 The newly uncovered document is a summary of the first audit which DKEVR conducted at the three power distributors operating in Bulgaria at that point for the period 2005-2009 and is signed by DKEVR Chair Angel Semerdzhiev. Photo by BGNES

Bulgaria's State Commission for Energy and Water Regulation (DKEVR) alerted then-Chief Prosecutor Boris Velchev about fraud schemes at power distributors almost three years ago but the case was never investigated in substance by the prosecuting authority.

The newly uncovered document is a summary of the first audit which DKEVR conducted at the three power distributors operating in Bulgaria at that point, CEZ, EVN and EON, for the period 2005-2009, according to reports of bTV.

The document is signed by former DKEVR Chair Angel Semerdzhiev.

Semerdzhiev sent the summary of the report to then-Chief Prosecutor Boris Velchev to draw his attention to the violations at the three companies revealed by the energy watchdog.

The tip-off, substantiated by facts and documents, shows that power distributors outsourced almost all their activities to related companies without informing state authorities or receiving permission to do so, thereby inflating costs substantially and sidestepping the Public Procurement Act.

"The abovementioned documents contain clauses which created almost all necessary conditions for a non-market, opaque, and unfounded increase in the expenses of the audited companies. The three firms are under an obligation to implement the terms of their licenses at minimal costs, aiming to reduce them, whenever possible," the DKEVR report to the prosecutor's office says, as cited by investor.bg.

"The common conclusion for the three companies is that the terms of the licenses were not observed, just as the stance of DKEVR that the cost of the outsourced activities must not exceed the cost of their execution before outsourcing" the tip-off of the watchdog says.

Prosecutor Snezhana Kopcheva, who is currently on a sick leave, launched a probe but refused to initiate pre-trial proceedings.

The investigating authority collected 12 folders of materials on the case but Kopcheva did not find enough evidence of crime.

The prosecutor, however, never investigated in substance the allegations of DKEVR of license breaches by the three power distributors.

The mass protests in Bulgaria in February 2013, which led to the resignation of the center-right GERB government, started over high electricity bills.

People took to the streets to protest the high prices of electricity and the abuses of power distributors, calling for a withdrawal of their licenses.

The growing public discontent caused the prosecuting authority to launch inspections at the three power distributors operating in the country, CEZ, EVN and Energo-Pro.

On April 3, following an inspection of over one month, Bulgaria's prosecuting authority came up with results of the probe indicating serious violations at DKEVR, power distributors, and the National Electric Company (NEK).