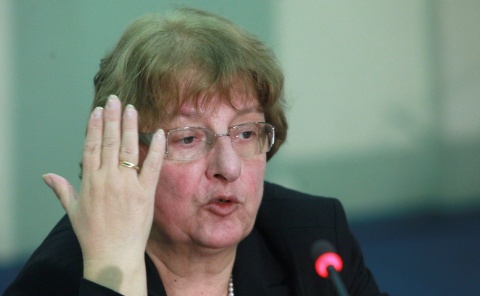 An increase in electricity prices from July 1, 2013 is very likely, according to Evgenia Haritonova, Chair of Bulgaria's State Commission for Energy and Water Regulation (DKEVR). Photo by BGNES

An increase in electricity prices from July 1, 2013 is very likely, according to Evgenia Haritonova, Chair of Bulgaria's State Commission for Energy and Water Regulation (DKEVR).

In a Tuesday interview for the morning broadcast of Nova TV, Haritonova refused to specify the amount of the increase or whether the change would be dramatic, adding that it was too early to comment.

"Taking into account the fact that miners are seeking a substantial increase in the price of coal from the Maritsa Iztok Mines, this will also affect the price of coal from other mines, given that coal accounts for around 75-80% of the main price of electricity generated by thermal power plants," the DKEVR Chair explained.

She also declined to specify the amount of the increase in the price of coal, stressing that the tariff was to be approved by the Ministry of Economy, Energy and Tourism.

Haritonova made clear that the fact that all energy companies had requested a power price hike did not necessarily mean that the proposal would be approved by the energy watchdog.

Asked to comment on a potential decrease in electricity prices, she noted that such a trend could not be predicted.

"The electricity transmission tariff is set by DKEVR and includes grid maintenance costs and the so-called green and brown surcharges," she explained, adding that the energy watchdog was not authorized to amend the renewable energy surcharge and the step could only be taken by Bulgaria's next Parliament.

She admitted that the electricity transmission tariff could be reduced from the current BGN 34 by around BGN 6 to the rate of BGN 28 through an ordinance of the caretaker Minister of Economy and Energy Asen Vasilev but the step would make no sense as the National Electric Company (NEK) would have to recover the expenses in the next pricing period and the tariff would yet again be increased.