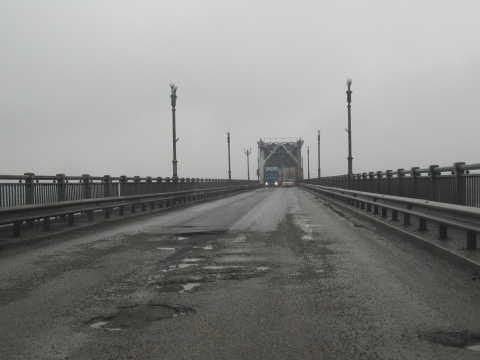 The past winter has been harsh on the old Danube Bridge, with many potholes emerging or growing. Photo by BGNES

The ban for trucks over 10 tonnes on the Danube Bridge between Bulgaria and Romania will remain at least until the end of the week due to reconstruction.

Bulgaria's Road Infrastructure Agency announced that work will resume Saturday, when warmer weather is expected to have set in.

A major pothole in the pavement of the close to 60 years old bridge has made probable that reconstruction works will go on through the month of May.

Lighter traffic over the bridge is currently restricted to a single lane.

Bulgarian and Romanian authorities are jointly repairing the facility, which is currently the only bridge linking the two countries along their 500-km Danube border.

The Bulgarian Road Infrastructure Agency said that after Saturday, freight traffic might be partially reopened.

Until Saturday however, trucks over 10 tonnes will have to be diverted to other checkpoints.

The 2.8 km Danube Bridge, linking Ruse in Bulgaria and Giurgiu in Romania, was completed in 1954.

A second facility, the so-called Danube Bridge 2, is expected to start operating between Vidin and Calafat in May.