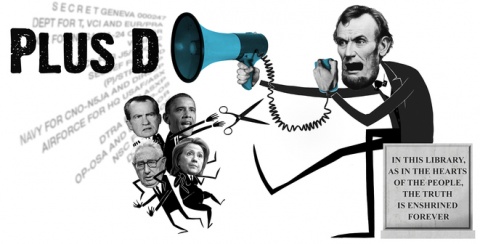 Starting Monday, the whistle-blowing site WikiLeaks is releasing for public access 1.3 million US diplomatic cables from the period of the Cold War, 1973 – 1976.

The project is dubbed The Kissinger Cables.

They include 205 901 records relating to former US Secretary of State Henry Kissinger. They cover a variety of diplomatic traffic including cables, intelligence reports and congressional correspondence. These include more than 227 000 cables classified as "CONFIDENTIAL" and 61,000 cables classified as "SECRET". Perhaps more importantly, there are more than 12 000 documents with the sensitive handling restriction "NODIS" or "no distribution", and more than 9 000 labeled "Eyes Only".

At around 700 million words, the Kissinger Cables collection is approximately five times the size of WikiLeaks' Cablegate.

It includes significant revelations about US involvements with fascist dictatorships, particularly in Latin America, under Franco's Spain (including about the Spanish royal family) and in Greece under the regime of the Colonels.

The documents also contain hourly diplomatic reporting on the 1973 war between Israel, Egypt and Syria (the "Yom Kippur war"). While several of these documents have been used by US academic researchers in the past, the Kissinger Cables provides unparalleled access to journalists and the general public.

WikiLeaks' publisher Julian Assange has stated: "The collection covers US involvements in and diplomatic or intelligence reporting on every country on Earth. It is the single most significant body of geopolitical material ever published."

In a press release, Wikileaks inform Monday that most of the records were reviewed by the United States Department of State's systematic 25-year declassification process. At review, the records were assessed and either declassified or kept classified with some or all of the metadata records declassified. Both sets of records were then subject to an additional review by the National Archives and Records Administration (NARA). Once believed to be releasable, they were placed as individual PDFs at the National Archives as part of their Central Foreign Policy Files collection. Despite the review process supposedly assessing documents after 25 years there are no diplomatic records later than 1976. The formal declassification and review process of these extremely valuable historical documents is therefore currently running 12 years late.

Wikileaks further report that the form in which these documents were held at NARA was as 1.7 million individual PDFs. To prepare these documents for integration into the PlusD collection, WikiLeaks obtained and reverse-engineered all 1.7 million PDFs and performed a detailed analysis of individual fields, developed sophisticated technical systems to deal with the complex and voluminous data and corrected a great many errors introduced by NARA, the State Department or its diplomats, for example harmonizing the many different ways in which departments, capitals and people's names were spelt.

All Wikileaks corrective work is referenced and available from the links in the individual field descriptions on the PlusD text search interface: https://search.wikileaks.org/plusd

According to the whistle-blowing site, the CIA and other agencies have attempted to reclassify or withhold sections of the US National Archives. Detailed minutes of US State Department meetings show that these attempts, which originated under the George W. Bush administration, have continued on through until at least 2009. A 2006 analysis by the US National Security Archives, an independent non-governmental research institute and library located at George Washington University, found that 55 000 pages had been secretly reclassified.

The censorship of the US National Archives was thrown into stark relief in November last year when the Archive censored all searches for 'WikiLeaks' from its records.

Assange says "the US administration cannot be trusted to maintain the history of its interactions with the world, but fortunately, an organization with an unbroken record in resisting censorship attempts now has a copy."

WikiLeaks' media partners will be reporting throughout the week on their findings. The official WikiLeaks partner for Bulgaria is site for investigative journalism Bivol.bg.