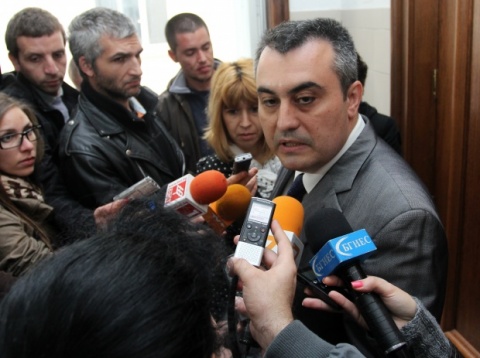 Dozens of Bulgarian journalists and citizens are staging Monday a protest rally in support of columnist Boris Mitov and against freedom of speech restrictions.

The demonstrators organized themselves on Facebook, after it emerged that Mitov from the Mediapool site has been summoned for the second time Monday by the Sofia City Prosecutor's Office. The group currently has over 1 000 members.

The rally is held in front of the main courthouse in downtown Sofia.

The journalist was already questioned by the prosecutors last Friday and was, allegedly, threatened by them with charges of leaking State secrets.

Meanwhile, Sofia City Prosecutor, Nikolay Kokinov, firmly denied the prosecution was pressuring journalists. Speaking for bTV Monday morning, he said the probe must conclude first, but it was unlikely Mitov would face charges.

The prosecution insists the photocopies attached to the article are classified information, even though they have been declassified by the presiding judge in the trial against Tsonev, Popov and Santirov; have been read in public during an open-doors Court session and are publically accessible from the Court's files office.

The journalist says he was threatened by Dragomir Yanchev, Prosecutor from the Sofia City Prosecutor's Office. During the questioning, Yanchev has demanded from Mitov to disclose his sources.

Kokinov informed Monday Yanchev had firmly denied threatening the journalist, and advised the latter to turn to the ethical commission at the Supreme Judicial Council, VSS, if he felt the prosecutor had exceeded his powers.

The Sofia City Prosecutor explained his office was only interested to find out who and how leaked the classified documents to Mitov.

"These documents must have been kept secret in the Court's classified files department. What was disclosed in the courtroom pertained only to evidence, but not to the methods to collect it. Mitov failed to provide them to us, thus he is summoned today," he said.

When asked by the TV host, why the probe had not started at the classified files unit, Kokinov replied: "Who told you that we did not check there? Things are going on parallel. To me, the attitude of the public and media towards the prosecution is close to paranoia."

The prosecutor stressed his office did not have any bad intentions regarding Mitov and no one should worry about him. He added the article itself was well written and interesting.