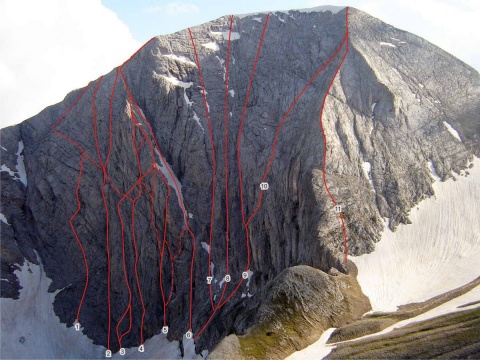 A summer picture of Vihren, showing climbing routes on its north wall. The Couloir Tour is marked with 6. Photo by ClimbingGuideBG.com

Four Bulgarian mountain climbers have been seriously injured, but their lives are out of danger, after a cornice fell onto them while they were climbing the Vihren peak in the Pirin Mountains.

The group was doing the so-called Couloir Tour on Vihren's north wall, when a snow cornice collapsed, swiping them at least 40 down the rocky face.

Rescuers were alerted and promptly arrived to the spot to find the four alpinist having sustained various grave injuries, including fractures of the pelvis and leg, and head and ribcage bruises.

The four were transported to the nearest medical center, where it was ascertained that their lives are out of danger.

The climbers were part of a 10-strong climbing group from Bulgaria's National Sports Academy.