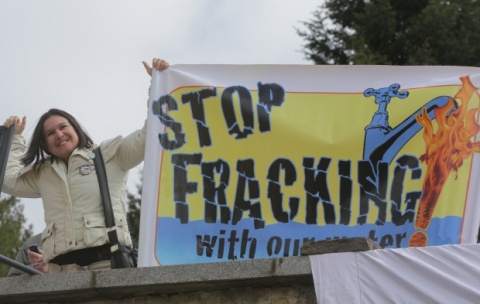 A rally in support of 20 Romanian cities protesting Thursday against hydraulic fracturing (fracking) was held in front of the Romanian Embassy in Sofia. Photo by BGNES

Bulgarians gathered in the northeastern town of Dobrich to protest against the potential use of the hydraulic fracturing technology in neighboring Romania.

The moratorium on the exploration and exploitation of shale gas by the use of the above technology in Romania expires Thursday.

The rally was held under the motto "Two Countries, Same Water - Two Nations, One Fight."

Locals fear that if the moratorium is lifted, the technology will for sure affect Bulgarian regions close to the Bulgarian-Romanian border and will destroy the soil and poison the waters. They demand not only extending the moratorium, but a law banning the technology. They filed the demand with the City Hall.

The demonstrators are also asking the Prosecutor's Office to probe for conflict of interest Dobrich Mayor, Detelina Nikolova, and all officials accompanying her in a recent trip to the USA on the invitation of the American Embassy in Sofia to learn about shale gas exploration and exploitation.

Nikolova has visited Texas, Pennsylvania, and Colorado to meet with agencies and commissions regulating shale gas exploration and exploitation. She firmly denies being in conflict of interest.

A rally in support of 20 Romanian cities protesting Thursday against hydraulic fracturing (fracking) was also held in front of the Romanian Embassy in Sofia.

Dobrich is located in Southern Dobrudzha, a grain-growing region known as "the granary of Bulgaria."