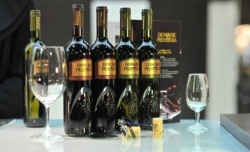 The competition has been very heated, says Prof Plamen Mollov, Chairman of the National Vine and Wine Chamber, which organized the contest.

It included 25 Bulgarian and 20 foreign (Italy, France, Moldova, and Azerbaijan) companies with 400 wine tasting samples, compared to 29 and 350 in 2012, respectively.

Bulgaria's Vinprom Peshtera grabbed three "Golden Rhytons." One was bestowed to Vinzavod Assenovgrad; one to Black Sea Gold, and one to Domaine Boyar.

In addition, the jury awarded 109 gold medals in the wine category; 14 – in the rakiya one; 7 – for brandy, and 2 for whisky. Eight silver medals were given for wines; 4 for rakiya; 4 for mastika, and 1 for menta and vodka each.

Mollov says the awards are internationally recognized and help Bulgaria's image as a wine and spirits making country.

Nikolay Moskov from 24 Chassa (24 Hours) daily received the first ever "Vinaria Journalist" award for his contributions for popularizing Bulgarian wines.

The 21st edition of the International Exhibition of Vine Growing and Wine Producing at the International Fair facility in the second largest city of Plovdiv lasts until April 6. Over 15 000 visitors are expected.

Italian sommelier Maurizio Ferreri is teaching a crash course titled "The Magic of Wine Tasting." The admission price is BGN 10.

Visitors can taste award winning wines and spirits along with the new collections of Bulgarian and foreign wines. Leading companies from 13 countries are presenting technologies, machinery, and other various equipment for vine growing and wine producing.

The expo is open every day from 9 am to 6 pm and closes at 2 pm on April 6. Admission is BGN 3 and BGN 2 for students, retirees, and the disabled.

In the course of the years, Vinaria succeeded to win recognition as the largest and most prestigious event of the vine-growing and winemaking sector on the Balkans.

The exhibition, which has been a member of the Union of International Fairs since 1997 (nowadays called the Global Association of the Exhibition Industry - UFI), is a business forum intended to showcase the achievements of the Bulgarian winemakers and traders, internationally renowned companies, research institutes and higher education institutions.