Dogan Attacker: No One Can Save You from People's Wrath 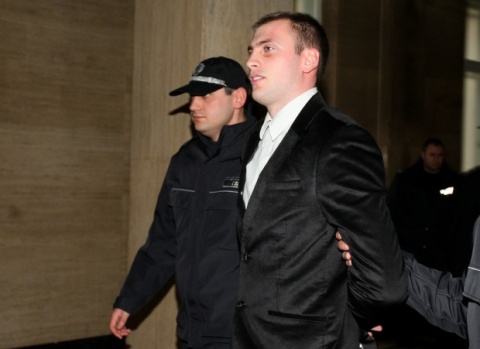 Oktay Enimhemedov is escorted to the courtroom with bruises from the lynching still visible on his face. Photo by BGNES

It is dated April 2, and its title "For Pure and Sacred Republic," is a famous quote of Vasil Levski, Bulgarian national hero and revolutionary from the time of Ottoman rule.

The Bulgarian 24 Chassa daily (24 Hours) writes Thursday that in the letter Enimehmedov says the incident he was involved in must be seen by Dogan and the "leeches" around him both as a warning and an opportunity.

He advises them to withdraw from politics and apologize to their voters for the crimes and treasons committed by them.

"Otherwise the National Security Services, NSO, and not even UFO would be able to rescue you from the wrath of the people," the letter concludes.

On Wednesday, Enimehmedov was officially charged with attempting to assassinate Dogan.

On January 19, police in Bulgaria detained 27-year-old Oktay Enimehmedov after he pointed a gun at Ahmed Dogan, leader of the opposition ethnic Turkish party Movement for Rights and Freedoms (DPS) as he was delivering a speech at the party conference in the capital Sofia. No shots were fired.

Enimehmedov was lynched by DPS delegates after the attack.

The young ethnic Turk stated that he did not actually want to kill Dogan, but to scare him. The gun was established to have been a gas pistol.

It was initially believed that he would only face grave hooliganism charges.

However, experts have told the Sofia City Prosecutor's Office that gas pistol shots can cause death if fired at a range closer than one centimeter from the temple, mouth or eyes. Therefore, the attacker is charged with a murder attempt.

Enimehmedov may face 15 years behind bars – or even life imprisonment – if sentenced.

On Monday, Enimehmedov's neighbors endorsed him to run for MP in the upcoming Bulgarian snap elections.