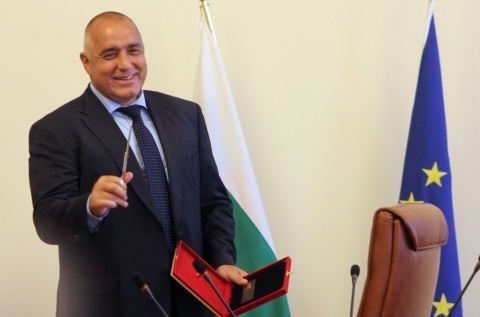 Bulgaria’s former Prime Minister Boyko Borisov did not shy away from admitting that the scandalous recording of his conversation with the customs head regarding the late businessman Mihail Mihov was authentic. File photo

The probe into a wire-tape scandal, implicating Bulgaria's former prime minister of protecting controversial businesses, has been conducted and suspended in compliance with the law, prosecutors said.

"The case dubbed "Misho the Beer” has been conducted properly and stopped in compliance with the law," Bulgaria’s deputy senior prosecutor Borislav Sarafov said on Wednesday.

The statement clears former Prime Minister Boyko Borisov and puts an end to speculations whether the recently elected new chief prosecutor of the country Sotir Tsatsarov will dig deeper in the scandal, which shook the country two years ago.

In 2011 Bulgaria experienced an avalanche of leaked wiretaps which first targeted the country's interior minister, Tzvetan Tzvetanov, but later focused on Borissov.

The wiretaps were apparently made by DANS, the country's national security agency, but were then leaked to Galeria, a tabloid with connections to Alexei Petrov, a controversial figure described by many as Borissov's most powerful enemy.

According to one of the tapes, Borissov instructs the country's customs chief, Vanio Tanov, to stop investigating a controversial businessman, Mihail Mihov, owner of a beer factory, stating he had "made commitments" not to harass him.

Borissov did not shy away from throwing fuel on the fire, saying during a meeting with bloggers that a taped phone conversation where he is allegedly heard speaking of the need to "protect" a controversial businessman from customs check was genuine.

Doctors said Mihov had a heart attack, but speculations that the controversial businessman, believed to have been close to those in power, was killed, emerged shortly after the news of his spooky death broke.

"This is just an example of an untimely death, which is convenient for everyone," Tsvyatko Tsvetkov, who served as Chief Secretary of the Interior Ministry during the ruling of Socialist Zhan Videnov, commented.

Tsvetkov, who is considered to be one of the best informed people in Bulgaria when it comes to behind-the-scene political hagglings, explained that a heart attack can be easily provoked.

Yane Yanev, leader of the Bulgarian conservative "Order, Law and Justice" (RZS) party and one of the archenemies of Prime Minister Boyko Borisov, took the speculations a step further.

"The official version that the rulers are trying to make people believe in is downright insolent. Mihov's death has no analogue in the transition of Bulgaria. A very important witness of high-level corruption has been done away with," Yanev fumed.