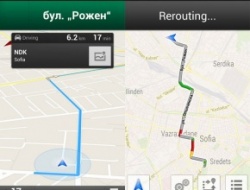 If you're in Bulgaria, the Google Maps app on your Android device will now offer navigation as an option when you make a directions query.

The turn-by-turn navigation in Google Maps has gone live in Bulgaria, three months after the expected release at the beginning of the year.

Now all Android users in Bulgaria who are sporting at least Android 2.2 and newer can take advantage of the Navigation feature.

It is even complete with real-time traffic updates, Bulgarian--language voice search and Bulgarian voice playback.