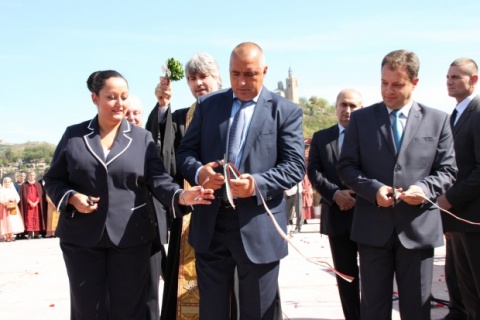 The young former Regional Minister, Lilyana Pavlova (l) was the one most often seen by ex PM Boyko Borisov's (center) side. Photo by BGNES

Bulgaria's former Regional Minister, Lilyana Pavlova, has firmly rejected tabloid publications she was in love with ex Prime Minister, Boyko Borisov, and was divorcing her husband.

Speaking for the Bulgarian Pressa (Press) daily, Pavlova said the above was a total lie, cooked by tabloids.

"I am not divorcing my husband. I am not in love with Borisov. I have a great husband and we see Borisov together, as a family. We often dine together, and we have a wonderful friendship," she said.

On the question if it was true, her and the former PM had a "love nest" in one of his apartments in downtown Sofia, Pavlova replied she did not even know the property existed.

"My husband was so cute when I told him that I made the tabloids' front pages. He asked me if they have published some ugly photographs of me and I said – no, over Boyko, and he said OK, fine," Pavlova explained.

The rumors were prompted by the fact the young Minister was the one most often seen by Borisov's side and the first one to visit him when he was hospitalized with high blood pressure days after submitting his resignation amidst mass protest rallies against poverty, stagnation, and the political system.