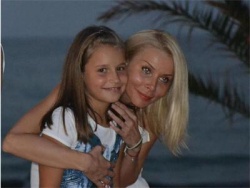 The former wife of alleged Bulgarian drug lord Evelin Banev aka Brendo has made a desperate plead nearly a month after their little daughter was abducted.

Monika Dobrinova pleaded for her 10-year-old daughter's safe return in an interview for the 24 Hours daily, saying she is worried sick by the lack of information.

“Days go by painfully slow. I am on sedatives, because I am very worried about my child. The only way to fall asleep is to take a pill, sometimes I am afraid I can take an overdose because I can’t think clearly. I can not eat, I can not do anything,” Monika Dobrinova shared in the interview, tears welling up in her eyes.

The mother said she can’t take the uncertainty any more and is on the verge of breaking down physically and emotionally.

She reiterated that she does not trust the Bulgarian state and the Bulgarian police, but is ready to give everything she has to bring her daughter back.

Addressing the abductors, she assured them she is ready to do everything they ask her and begged them to contact her.

"I want to appeal to the people, who abducted Lara, and tell them I just want to know whether she is alive and well, " said Dobrinova.

She explained that Lara is very vital and loving child and she certainly is going through hell now.

"She does not deserve this, she is just a child. I would do absolutely anything to get her back.”

10-year-old Lara was abducted by masked gunmen at approximately 7:30 am at the beginning of March 5 in the affluent Sofia suburb of Boyana.

Banev and the others are charged with laundering over EUR 2 M using a personal account belonging to Konstantin Dishliev, owner of a firm called Private Finance Union, who was killed in 2005.