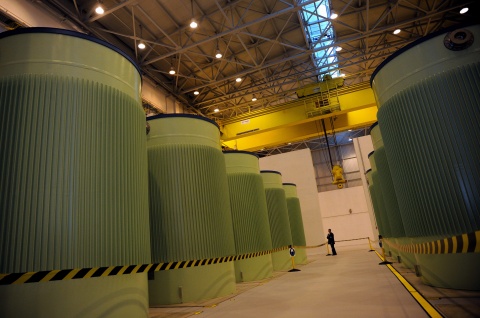 A staff member stands at the newly built storage facility for dry storage of spent nuclear fuel at the Bulgarian nuclear power plant in the town of Kozloduy some 200 km from Sofia, Bulgaria 12 May 2011. Photo by EPA/BGNES

The European Commission has come up with an official stance on the disposal of radioactive waste arising from the decommissioning of Units 1 and 2 of the Kozloduy Nuclear Power Plant and its potential impact on EU Member States, according to a media statement of Bulgaria's State Enterprise Radioactive Waste (SE-RAW).

The Opinion of the European Commission, published in the Official Journal of the EU on March 28, says: "On 16 February 2012, the European Commission received from the Bulgarian Government, in accordance with Article 37 of the Euratom Treaty, General Data relating to the plan for the disposal of radioactive waste arising from the decommissioning of Units 1 and 2 of the Kozloduy Nuclear Power Station.

1. The distance from the site to the nearest border of another Member State, in this case Romania, is 4 km.

2. Under normal decommissioning conditions the discharges of liquid and gaseous radioactive effluents are not liable to cause an exposure of the population in another Member State that would be significant from the point of view of health.

3. Solid low- and intermediate-level radioactive waste will be stored on site awaiting the availability of a national repository.

4. Non-radioactive solid waste and residual materials in compliance with clearance levels will be released from regulatory control for disposal as conventional waste or for reuse or recycling. This will be done in compliance with the criteria laid down in the Basic Safety Standards (Directive 96/29/Euratom).EN 28.3.2013 Official Journal of the European Union C 92/1 ( 1 ) For instance, under the Treaty on the Functioning of the European Union, environmental aspects should be further assessed. Indicatively, the Commission would like to draw attention to the provisions of Directive 2011/92/EU on the assessment of the effects of certain public and private projects on the environment, Directive 2001/42/EC on the assessment of the effects of certain plans and programmes on the environment, as well as of Directive 92/43/EEC on the conservation of natural habitats and of wild fauna and flora and Directive 2000/60/EC establishing a framework for Community action in the field of water policy.

5. In the event of unplanned releases of radioactive effluents, which may follow an accident of the type and magnitude considered in the General Data, the doses likely to be received by the population in another Member State would not be significant from the point of view of health.

In conclusion, the Commission is of the opinion that the implementation of the plan for the disposal of radioactive waste in whatever form, arising from the decommissioning of Units 1 and 2 of the Kozloduy Nuclear Power Station, located in Bulgaria, both in normal operation and in the event of an accident of the type and magnitude considered in the General Data, is not liable to result in a radioactive contamination significant from the point of view of health of the water, soil or airspace of another Member State."