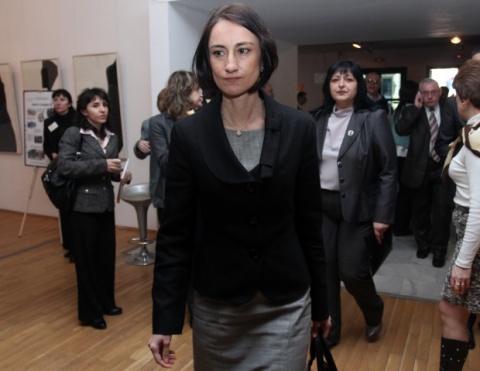 Caretaker Deputy PM and Social Minister, Deyana Kostadinova, is chairing the Tuesday sitting of Bulgaria's Three-Way Council dedicated to urgent measures to be taken by the Cabinet to aid the poor. Photo by BGNES

Employer organizations fulfilled Tuesday their threat to stay out of the meeting of Bulgaria's Three-Way Council on social affairs between them, the Cabinet and the trade unions.

Minutes after the caretaker Deputy PM and Social Minister, Deyana Kostadinova, opened the sitting, representatives of the four national employer organizations submitted an official declaration, stressing they refuse to participate.

Their outrage stems from amendments to the Disclosing Properties and Assets of Public Figures Act, recently passed by the now-dissolved Parliament, which stipulate that members of employer organizations boards must have their property publicly disclosed.

The employers say they will ask President, Rosen Plevneliev, Chief Prosecutor, Sotir Tsatsarov, and Ombudsman, Konstantin Penchev, to seek the reaction of the Constitutional Court in the matter.

The leaders of the two main trade unions, Konstantin Trenchev of Podkrepa (Support) and Plamen Dimitrov of the Confederation of Independent Syndicates in Bulgaria, KNSB, were unanimous the amendments were in violation of the Constitution, but promised, nevertheless, to file their declarations by the deadline of April 9.

The trade unions also said they would participate in the Three-Way Council sitting because it was their duty to act responsibly.

At the sitting, Bulgaria's government and trade unions are now discussing urgent measures to be taken by the Cabinet to aid the poor in the absence of the employers.