Moscow: No Bail Out for Russian Savers in Cyprus 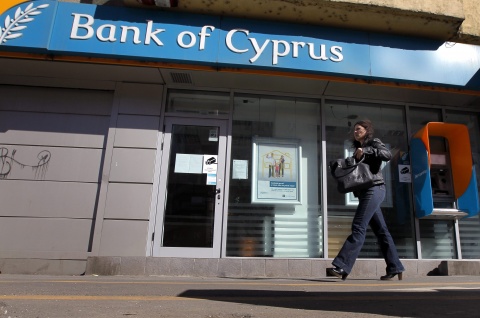 A Romanian woman passing a closed local branch of Bank of Cyprus, in downtown Bucharest, Romania, 01 April 2013. Photo by EPA/BGNES

The Russian government announced it will not compensate Russian savers who have lost money in the Cyprus banking crisis.

Russians are believed to have billions of euros in Cypriot accounts and following the painful haircuts in the two biggest banks deposits above EUR 100,000 could shrink by as much as 60%.

"Such losses would be a great shame, but the Russian government won't take any action in that situation," First Deputy PM Igor Shuvalov said,

Speaking on the Russian state TV channel Rossiya 1, Mr Shuvalov said Russian money in Cyprus included some that had been taxed and some that had not.

He said the Russian government would still look at cases where there were "serious losses, involving companies in which the Russian state is a shareholder".

That review would take place in Russia, and "for this it would certainly not be necessary to help the Republic of Cyprus", he said.

Bank of Cyprus depositors with more than EUR 100 000 could lose up to 60% of their savings as part of an EU-IMF bailout restructuring move.

Large depositors in the Bank of Cyprus will get back 37.5% of their money in shares instead of cash, but they may be worth nothing, analysts have warned.

Up to 22.5% will go into a fund attracting no interest and may be subject to further write-offs.

The other 40% will attract interest - but this will not be paid unless the bank performs well.

The move is the part of the painful Cyprus rescue package, but analysts say the shares offered are "near worthless".

Cypriot officials have also said that big depositors at Laiki - the country's second largest bank - could face an even tougher "haircut". However, no details have been released.

The plan is for Laiki to be eventually absorbed into the Bank of Cyprus.

Cyprus needs to raise EUR 5.8 B to qualify for the bailout, and has become the first Eurozone member country to bring in capital controls to prevent mass torrents of money leaving the island and credit institutions collapsing.

The original EUR 10 B bailout deal was agreed in Brussels earlier this month. It placed a one-off tax on all customers of Cypriot banks, starting at 6.75% for the smallest deposits.

The move led to mass protests across Cyprus, and the deal was later voted down by the country's Parliament. MPs later backed a revised deal.

On Thursday, banks in Cyprus opened for the first time in nearly two weeks. Long lines were reported as people tried to access their money, but the mood was generally calm and by Friday the banks returned to normal.