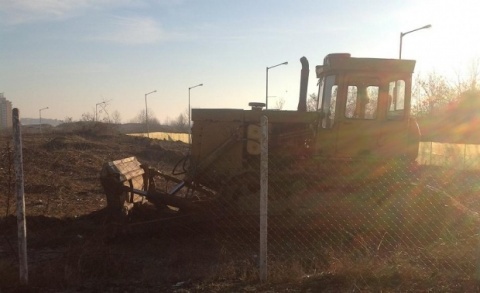 The scandal with construction activities on 29 decares of protected sand dunes between Ravda and Nessebar on the Black Sea coast erupted in the last days of 2012. Photo by BGNES

The investigation in illegal construction activities on protected sand dunes between Ravda and Nessebar on the Bulgarian Black Sea coast has been extended by four months.

The information was reported by Kalina Chapkanova, District Prosecutor of Burgas.

Chapkanova explained the decision has been imposed by the need of a large number of expert reports, while one of the key witnesses – a researcher – has been suffering a serious ailment, preventing him from taking the witness stand. The same researcher, an expert from the Bulgarian Academy of Sciences, BAS, was the one to insist the terrain in question did indeed include protected sand dunes.

The two defendants in the case are the Mayor of Nessebar, Nikolay Dimitrov, and the Chief Architect of the Nessebar Municipality, Valentin Dimov.

The so-called "Dunes Gate" scandal erupted in the last days of 2012 when environmentalists said that the construction site was part of the Aheloy-Ravda-Nessebar protected area from the Natura 2000.

As a result, it became clear that the area was sold under the last Cabinet term of the centrist Citizens for European Development of Bulgaria party, GERB, without a tender based on an older law that was in force until 2010. The new Forestry Act, passed in 2011, technically does not provide any way of selling State land without tenders, but it said it allowed procedures that started before 2010 to be completed under the older law.