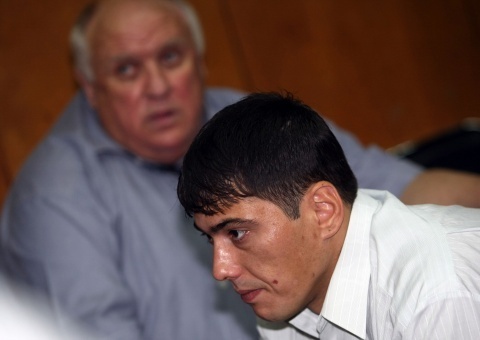 Attorney, Marin Markovski, and defendant, Lazar Kolev (front) are seen in the courtroom. Photo by BGNES

Bulgaria's high-profile "Belneyski" double murder case is entering its final stage after the Supreme Court of Cassations (VKS) returned it to the Plovdiv District Court for retrial by a new judge panel.

Closing pleas will be heard by the judges Wednesday.

Prominent attorney, Marin Markovski, says he will ask for a not-guilty verdict for the only defendant, Lazar Kolev, on grounds of lack of beyond reasonable doubt.

Kolev was also sentenced to pay BGN 400 000 to the parents of the victims, sisters Hristina and Rositsa Belneyski.

At a hearing at VKS in April 2012, however, the parents of the murdered girls demanded a retrial.

The parents explained the move with the fact that they wanted Kolev to name his accomplice, which he had failed to do.

Sisters Rositsa (18) and Kristina (15) Belneyski went missing in January 2006, after leaving a night club in the town of Pazardzhik.

The sisters were found dead at the beginning of February 2006 near the town of Peshtera.

It emerged Tuesday that a five-member expert panel has come up with the conclusion that the collected evidence does not affirmatively prove Kolev's involvement and if the killer had any accomplices.

VKS returned the trial to the Plovdiv Court in October 2012.