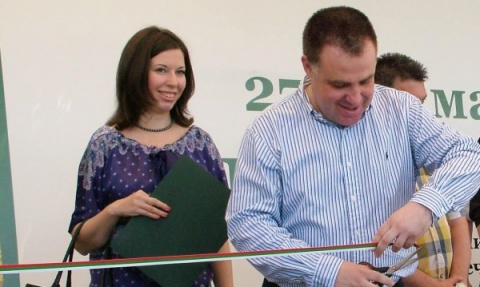 Kalina Ilieva and Miroslav Naydenov at the time she was the CEO of Fund Agriculture. File photo by Bulfoto

Former Bulgarian Minister of Agriculture Miroslav Naydenov insists he has been charged in a case that "simmered" in the prosecution's office for three and half years in awaiting the most favorable moment to attack him.

It was revealed Tuesday that the Sofia City Prosecution has levied several charges of attempt to bribe and abuse of power against Naydenov, who served in the GERB Cabinet of former Prime Minister, Boyko Borisov, 2009-2013.

In an immediate reaction after the news made headlines, Naydenov informed he had been summoned for questioning at 3 pm Monday. He has decided to not use his right to appear in 3 days after receiving the subpoena, but do it immediately.

He is firm the Bulgarian Socialist Party has pressured the prosecution to act against him by using slander tip-offs, coming from Kalina Ilieva, former Director of the State Fund Agriculture, which she had been taking to different parties for years.

"For me this is an opportunity to finally clean my image and point at those who have masterminded all this. I am not worried by Ilieva, the Special Surveillance Devices wired on her, or by other individuals, who have been coerced to testify against me," Naydenov says in a letter to the media.

Back in February, Naydenov refuted allegations that he is being investigated by the European Anti-Fraud Office (OLAF) for EU funds embezzlement, saying again OLAF has received fake tip-offs from Ilieva.

In the summer of 2012, Ilieva received a 3-year suspended sentence with a five-year period of probation for forging her own university diploma.

Ilieva was dismissed from the post at the beginning of October 2010, after it became clear she tried to conceal her pregnancy from her superiors. Now-former Prime Minister, Boyko Borisov, said at the time she lied to him she had a tumor in order to explain her gaining weight while Naydenov announced she told him she was going to Germany to undergo surgery, only to learn days later she had given birth.

In the aftermath, it was also revealed that Ilieva's university diploma from Germany was forged and the German prosecutor began a probe against her. The German investigation was halted after it became clear the diploma had not been forged on German territory.

Kalina Ilieva is the daughter of former Sofia fire brigade chief Iliya Iliev, who is a friend of Borisov.

Naydenov now says, Ilieva has been attracted as a member by the Bulgarian Socialist party and was acting on their behalf to secure a spot in their election ballot. The Socialists have discarded this as pure non-sense.

Bulgaria is to hold early elections on May 12, following the February resignation of Borisov.