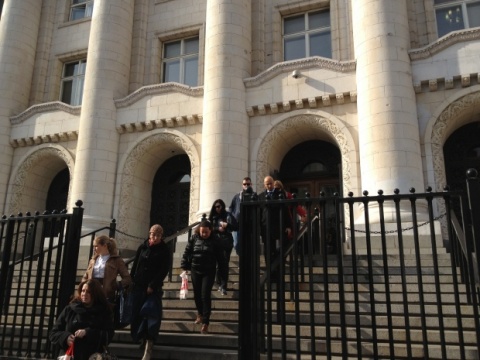 The latest bomb threat phone call has disrupted once again the schedule of the main courthouse in the Bulgarian capital. File photo

A bomb alert for the Sofia City Court has caused the evacuation of the main courthouse in the Bulgarian capital Monday morning.

The call has been placed around 9 am on the 112 emergency hotline with a male voice informing there was a bomb inside the building. The bomb squad and the police are checking the premises.

Last week a similar phone call closed the building in downtown Sofia from which notorious Bulgarian drug lord Zlatomir Ivanov aka Baretata (The Beret), was shot at and wounded on January 29. It is right across the courthouse. The police did not find any traces of explosives.

An increased number of bomb threats for shopping centers, courts and schools in Sofia and several other major Bulgarian cities were registered in the last few months.