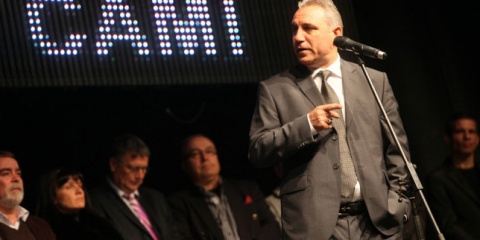 The National Representation of Student Councils (NPSS) invited Stoichkov to become their endorser at a Saturday meeting in Arena Armeets Sofia. Photo by BGNES

Bulgarian football legend Hristo Stoichkov has said that he has no intentions of getting into politics but he will back students who asked him to become their patron.

The National Representation of Student Councils (NPSS) invited Stoichkov to become their endorser at a Saturday meeting in Arena Armeets Sofia and he agreed on the condition that his image would remain untarnished.

"This is the last time I am saying that I have no party affiliation. My party is the villages and cities I have been to – this is my party, being among the people. I am a supporter of the people who I believe are able to fix things in Bulgaria. It is easier for me than for any of you to pack my bags and fly off to Spain or to the US without caring in the least bit," he stated at the Saturday meeting.

Stoichkov explained that he had paid the rent of "some BGN 10 000 – 15 000" for the sports arena so that "no names of oligarchs or a range of other people" are mentioned during the event.

The Bulgarian football legend vowed to help students with his international popularity, while the students assured him that their relations would be absolutely fair.

"Politicians are not allowed here. We want the people to nominate their representatives clearly, openly, and in public. There is a website, a platform, which will be launched Saturday, with Darik radio as media partner, and it will be available to all. All citizens will have the opportunity and the right to nominate whoever they deem appropriate for a participant in Bulgaria's next government," said Angel Hristov, NPSS leader.

He added that more details would be available after a March 26 meeting of NPSS with representatives of all non-governmental organizations supporting the entity.

Earlier on Saturday, protesters distanced themselves from the students who picked Hristo Stoichkov as patron.

Dimitar Todorov, a student, argued that the meeting in Arena Armeets had been paid for by controversial GERB MP Emil Dimitrov, which corrupted the idea behind the protest.

Bulgaria's marginal conservative Order, Law and Justice (RZS) party declared that the Saturday meeting of NPSS had nothing to do with freethinking students and civic organizations.

RZS claimed that the meeting had been staged by "puppeteers" who had been pulling the strings ever since the wave of protests in Bulgaria started.

The February wave of mass anti-poverty protests in Bulgaria led to the resignation of the center-right GERB government, with early elections scheduled to take place on May 12.