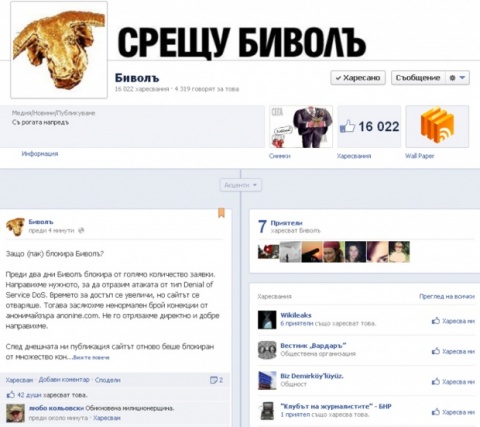 The site for investigative journalism Bivol is dubbed the Bulgarian WikiLeaks and the most successful WikiLeaks copycat. File photo

Bulgaria's Prosecutor's Office has confirmed it is probing investigative journalists Atanas Tchobanov and Assen Yordanov from the site Bivol.bg.

Three days ago, the two asked in a letter Bulgarian caretaker Prime Minister, Marin Raykov, caretaker Interior Minister, Petya Parvanova, Chief Prosecutor, Sotir Tsatsarov, and the Chief of the National Agency for State Security, DANS, Konstantin Kazakov, to provide information if it was true the secret services are snooping around them in a case codenamed "Buddhali" and if there is such case, when was it launched, on what legal grounds, on whose order, and what is its goal.

Bivol, dubbed the Bulgarian WikiLeaks and the most successful WikiLeaks copycat, have now received a letter signed by the Press Office of the Supreme Prosecutor's Office of Cassations, stating that according to the "instruction for filing documentation at the Prosecution of Republic of Bulgaria, when there is registration of documents pertaining to a case that has been already launched, the filing employee should record the registration number and index of the original file and the date of registration of the newly formed file."

The Bulgarian news agency BGNES informs that a check of the site of the Prosecutor's Оffice has revealed the so-called "already-launched" case has been decided on and logged by the Supreme Prosecutor's Office of Cassations on February 18, 2013, (two days before the resignation of Prime Minister Boyko Borisov), and has been sent to the "competent authorities," thus there is indeed a "Buddhali" probe.

Bivol have written on their site that with the above the former PM and leader of the Citizens for European Development of Bulgaria party, GERB, has "fulfilled" his public threat he could launch a wiretap and investigation against any journalist in Bulgaria.

Yordanov and Tchobanov are calling for declassification and making public the entire file, all of its details, the probe's stage and the actions already carried out, including with special surveillance devices, SRS. They say they will insist on the above before all Bulgarian and EU institutions.

Back in February the site published the so-called "Buddha" file, undoubtedly proving Borisov's ties to organized crime in the 90s of the 20th century.

From the publication, society learned that in 1996 Borisov has been recruited by the Central Services for Combatting Organized Crime, CSBOP, as an informant under the alias Buddha, while in 1997 a plan for operative surveillance has been established for him to "clarify his criminal orientation."

Commenting on the publications at the time, Borisov said that he could order the secret services to launch such surveillance cases against any journalist in Bulgaria. This prompted "Reporters without Borders" to issue a special press release condemning his statement, stressing "secret service investigations" of journalists and media were a thing of the past, the Cold War era, not compatible with Borisov's position as one of the EU's 27 most senior representatives.

The Interior Ministry firmly stated the documents from the Buddha file have been declassified on Borisov's own request prior to Bivol publishing them, thus prosecuting the journalists for classified leaks was ruled out.

The news about the "Buddhali" probe comes on the backdrop of the European Commission launching large-scale consultations on media freedom on the Old Continent with Bulgaria and Hungary prompting the need of them.

In her speech at the official opening, European Commission Vice President and EU Digital Agenda Commissioner, Nellie Kroes, accused Brussels of ignoring pressure on the media for the sake of political solidarity.