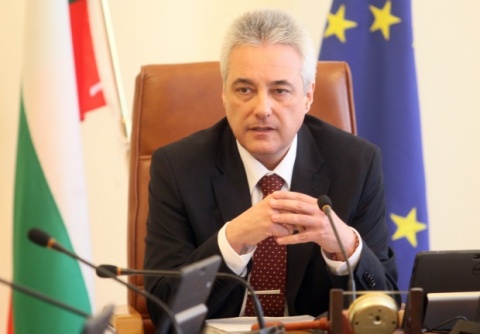 Bulgarian caretaker Prime Minister, Marin Raykov, is asking the competition watchdog to find out which are the cartels in the country. Photo by BGNES

Raykov spoke after the very first sitting of his Cabinet and during his first press conference at the Council of Ministries.

With this goal in mind, caretaker Economy Minister, Asen Vasilev, had been leading active and constructive dialogue with the three foreign-owned electric power distributors in Bulgaria.

Raykov addressed the recent request of Austrian power utility EVN to increase electricity prices by saying such issue was not on the table.

He assuaged fears of unprincipled pressure on investors, but stressed the Cabinet would analyze the system of forming prices, including through an independent international audit.

Caretaker Deputy Prime Minister and Regional Minister, Ekaterina Zaharieva, commented problems in the energy sector have piled up over the years and on the entire chain.

She also backed the idea for a check and an audit to find out if there were any reserves, because currently the State Agency for Energy and Water Regulation, DKEVR, and everyone involved were claiming there aren't.

It is expected that in the upcoming 10 days, each power distributor would present changes in the general clauses in the consumer contracts in order to increase protection of their rights.

Raykov added the issue with the functioning of all watchdogs in the country, not just DKEVR, was of prime importance.

He called on the Commission for Protection of Competition to establish if there are monopolies in the country.

"Even as a citizen, I cannot accept that this has not been done until now, since we have a series of infringement procedures against Bulgaria precisely over this," Raykov stated.

Bulgaria was recently shaken by moth-long mass protest rallies which started as outrage against unbearable utility bills and later turned into demonstrations against poverty, monopolies, corruption, stagnation, and politicians.

The unprecedented since 1997 rallies led to the resignation of Prime Minister Boyko Borisov and the Cabinet of his Citizens for European Development of Bulgaria party, GERB.