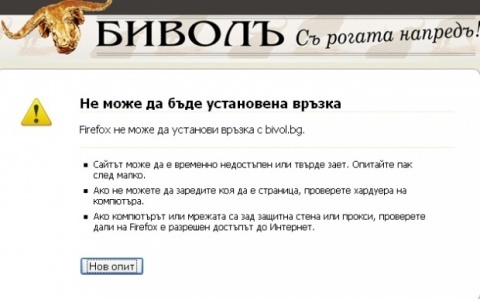 After publishing the notorious “Buddha” file, the Bulgarian site for investigative journalism Bivol was subjected to hacker attacks. File photo

Bulgarian investigative journalists have alerted European Union institutions about the suspected use of the country's secret services against media work.

The journalists from the site Bivol.bg, dubbed the Bulgarian WikiLeaks and the most successful WikiLeaks copycat, have sent a letter to Cecilia Malmstrom, the European Commissioner responsible for Home Affairs, and to Juan Fernando Lopez Aguilar, Chairman of the Committee on Civil Liberties, Justice and Home Affairs (LIBE) at the European Parliament, insisting on a EU probe in the suspected spying on journalists, aiming at discrediting them.

In the letter, the journalists tell Malmstrom and Aguilar that their site is an independent Bulgarian online investigative media, focusing on corruption and organized crime as the hottest issues in Bulgaria.

They remind that back in February the site published the so-called "Buddha" file, undoubtedly proving former Bulgarian Prime Minister Boyko Borisov's ties to organized crime in the 90s of the 20th century.

From the publication, society learned that in 1996 Borisov has been recruited by the Central Services for Combatting Organized Crime, CSBOP, as an informant under the alias Buddha, while in 1997 a plan for operative surveillance has been established for him to "clarify his criminal orientation."

Commenting on the publications at the time, Borisov said that he could order the secret services to launch such surveillance cases against any journalist in Bulgaria. This prompted "Reporters without Borders" to issue a special press release condemning his statement, stressing "secret service investigations" of journalists and media were a thing of the past, the Cold War era, not compatible with Borisov's position as one of the EU's 27 most senior representatives.

The Association of European Journalists sent a request to Chief Prosecutor, Sotir Tsatsarov, insisting on receiving an answer if there have been and if they are such surveillance cases as they could stir a huge scandal for being a blunt violation of Bulgarian and European law.

Bivol joined the request, but no one ever received an answer.

"Our site, Bivol, became subject of mass hacker attacks after it published the Buddha file. We also received numerous anonymous threats. We alerted the services about some of them, but their authors still remain unknown. As a payback, we were tipped off by well-intended sources that these same secret services are following our activities. As we had no means to check the validity of this information, we refrained from publishing it or discussing it until now," the journalists write.

They explain their concrete reason for turning to EU officials has been the public announcement made by Bulgarian MEP Slavi Binev last week that he had information about a secret services case, codenamed "Buddhali" (in Bulgarian this means fools) aiming precisely at the Bivol journalists, as Binev had named them.

"We are not certain about the level of reliability of this information, but the very fact it has been announced by a MEP, who is also a member of the EP's Special Committee on Organized Crime and Corruption, CRIM, is very alarming. We believe the European Commission must execute a detailed probe to establish if there is indeed such surveillance case, which could be done in the frame of this month's visit of the EC mission under the Cooperation and Verification Mechanism, CVM. As Bulgaria currently does not have a working Parliament, we call on LIBE at the EP to initiate a probe in the case," the journalists further write.

According to the journalists, LIBE must insist before Bulgarian authorities to provide answers to the following questions:

"Is there a surveillance case at the Interior Ministry or the State Agency for National Security, DANS, codenamed "Buddhali," against Bivol journalists Atanas Tchobanov and Assen Yordanov?

If there is such case, when was it launched, on what legal grounds, on whose order, and what is its goal?"

Meanwhile, also on Wednesday, Binev's press office informed the MEP had sent a letter to DANS, asking answers in the suspected surveillance case as well.