UK Sends Plane with EUR 1 M for Britons in Cyprus 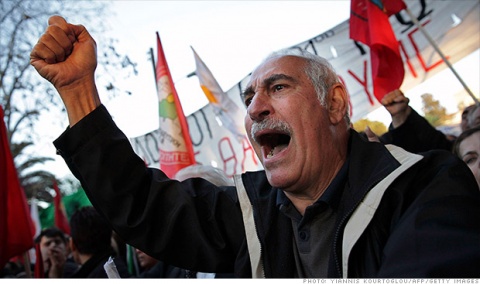 Cypriots protest against EU bailout and plans for a levy on bank deposits. Photo by Getty Images

UK Ministry of Defence said on Tuesday evening that a plane carrying EUR 1 M had arrived in Cyprus to make sure military personnel and their families are provided with emergency loans.

The money is to be used for British personnel and their families if cash machines and debit cards stop working, BBC reported.

The Cypriot Parliament expectedly rejected late on Tuesday the international bailout package that involves taxing ordinary depositors to pay part of the bill.

There were zero votes in favor, 36 votes against, and 19 abstentions. Cyprus's Parliament has 56 seats.

Lawmakers voted hours after President Nicos Anastasiades said they were likely to reject it.

The proposed tax on deposits, unprecedented in a eurozone bailout, led to a run on cash machines in Cyprus over the weekend, sparked big protests outside parliament and shook financial markets Monday.

After the vote Germany's finance minister Wolfgang Schaeuble warned Cyprus that its crisis-stricken banks may never be able to reopen if it rejects the terms of a bailout.