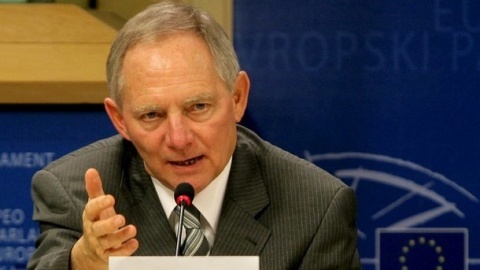 Wolfgang Schaeuble said major Cypriot banks were "insolvent if there are no emergency funds". Photo by EPA/BGNES

Germany's finance minister has warned Cyprus that its crisis-stricken banks may never be able to reopen if it rejects the terms of a bailout.

Wolfgang Schaeuble said major Cypriot banks were "insolvent if there are no emergency funds".

He was speaking after the Cypriot parliament rejected an international bailout deal that would have imposed a one-off tax on bank deposits.

Frantic talks are under way to try to agree an alternative plan.

Late on Tuesday, Schauble said that he "regretted" the vote.

"The ECB (European Central Bank) has made it clear that without a reform programme for Cyprus the aid can't continue. Someone has to explain this to the Cypriots and I think there's a danger that they won't be able to open the banks again at all," he said.

"Two big Cypriot banks are insolvent if there are no emergency funds from the European Central Bank," Schauble added.

The Cypriot Parliament expectedly rejected late on Tuesday the international bailout package that involves taxing ordinary depositors to pay part of the bill.

There were zero votes in favor, 36 votes against, and 19 abstentions. Cyprus's Parliament has 56 seats.

Lawmakers voted hours after President Nicos Anastasiades said they were likely to reject it.

The BBC has reminded that the country's Finance Ministry had proposed exempting savers with smaller deposits, but opposition remained fierce.