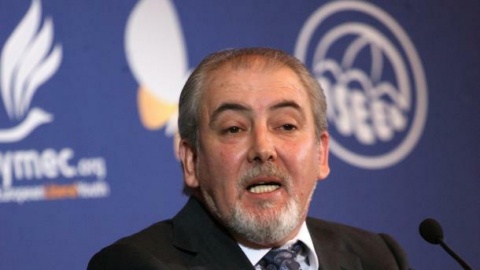 Lyutvi Mestan, leader of the ethnic Turkish party Movement for Rights and Freedoms. Photo by BGNES

DPS leader, Lyutvi Mestan, informed the party will ask the PM if he had already done a fiscal audit of the State coffers; what the situation with the budget is, and how the interim government plans to maintain the normal functioning of social systems.

Mestan further informs he was going to insist on an answer regarding unconfirmed reports that former Interior Minister, Tsvetan Tsvetanov, in his capacity of Chairman of the Commission for Dealing with Disasters and Emergencies, has given to municipalities, whose administration is from his GERB party, 70% of the funds for 2013.

The snap election on May 12 will also be on the agenda.

"We expect from the caretaker PM and his Cabinet to reinstate the feeling there is a functioning State, because this is the largest deficit in Bulgarian society after the rule of the last government. This is what sparked the protests and the political process must return to normal ASAP. The country must be ruled by politicians who have a clear vision for the direction we must follow. It should not be ruled by polishing someone's media image," the DPS leader stressed.

He further explained he opposed a witch-hunt in the administration, but expected strong control on State servants so that they do not act as campaign managers for GERB, as it happened during the local and presidential election in 2011.

The Cabinet of Prime Minister, Boyko Borisov and his Citizens for European Development of Bulgaria party, GERB, resigned on February 20th amidst unprecedented since 1997 protests against high utility bills, monopolies, poverty, economic stagnation, corruption, and the political model of ruling the country after the fall of the Communist regime in 1989.

Speaking from the parliamentary rostrum just minutes after the Parliament accepted with overwhelming majority the resignation, Borisov shockingly stated the honorary lifetime DPS leader, Ahmed Dogan wanted him dead, citing a document from the intelligence of a foreign country.

"There is no reliable information implicating Dogan in the preparation of an attack against Boyko Borisov at the time when he was Chief Secretary of the Interior Ministry," Chief Prosecutor, Sotir Tsatsarov informed last Thursday.

Mestan continues to insist Borisov must be legally prosecuted as he had either leaked classified information or used slander against the lifetime DPS leader.

He stressed the case brought shame and ridicule for Bulgaria before the European Union.