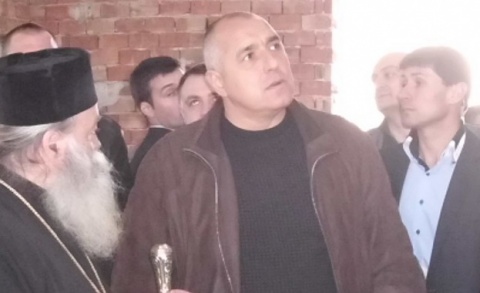 In his first public appearance after his resignation, former Bulgarian PM, Boyko Borisov, went to church to ask people and God for forgiveness. Photo by Cross.bg

Bulgaria's former Prime Minister, Boyko Borisov, made his first public appearance after his resignation during a Sunday trip to the northwestern city of Lovech.

He was there to visit the construction site of the St. St. Kiril and Methodius church for which his Cabinet slated BGN 600 000. Borisov also met with Lovech Metropolitan Gavriil.

"As Bulgarians ask for and give forgiveness today, I want to ask forgiveness from people and God. My mistakes and sins before them have been unintentional," Borisov said.

After that, in the company of his former Deputy and Interior Minister, Tsvetan Tsvetanov, he went to the second stop on the agenda – the construction of the gym at the Foreign Language High School, also funded by his former government.

After arriving in his own SUV, driven by him, the two were met by a group of dozen young people, booing them and shouting "Why are you running away?" and telling policemen: "Why are you guarding him, he is no longer in power?"

The demonstrators were holding posters with Borisov's portraits and signs underneath them reading "He is responsible for our misery," "He caused huge unemployment," "He banned smoking and destroyed bars and restaurants," "Over 40% of youth are unemployed," "Who appointed Mitko the Karate Man at CEZ with a salary of BGN 35 000 a month," "Where is our money?" and "What happened to Misho The Beer?"

The high school is the one Borisov's other Deputy and former Finance Minister, Simeon Djankov, has graduated from.

The Cabinet Borisov and his Citizens for European Development of Bulgaria party, GERB, resigned on February 20th amidst unprecedented since 1997 protests against high utility bills, monopolies, poverty, economic stagnation, corruption, and the political model of ruling the country after the fall of the Communist regime in 1989.

Tsvetanov is to meet in the evening with GERB activists in Lovech. Earlier in the day, he held such meetings in the towns of Teteven and Lukovit.