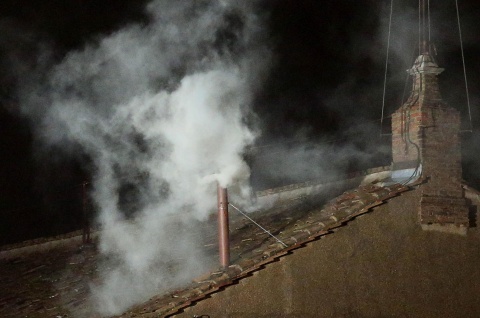 White smoke rises from the chimney on the roof of the Sistine Chapel to indicate that cardinals have elected a new pope on just the second day of their secret conclave at the Vatican City, 13 March 2013. Photo by EPA/BGNES

White smoke billowed over the Vatican Wednesday night, indicating that he cardinals elected a new Pope.

The new pope, whose name is yet to be revealed, is to appear on the balcony of St. Peter's Basilica within an hour, after a church official announces "Habemus Papum" ("We have a pope") and gives the name of the new pontiff in Latin.

The successor of Pope Benedict XVI was elected with a two-thirds majority, or at least 77 votes, by the cardinal conclave.

The 115 cardinals have been in isolation since Tuesday afternoon, and held four inconclusive votes before electing a Pope, according to reports of the BBC News.