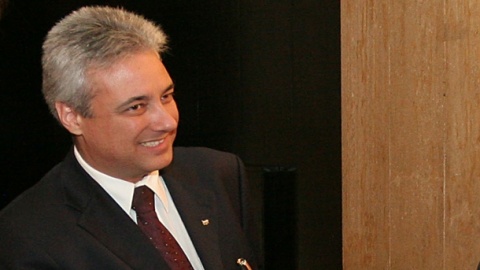 Bulgaria's Ambassador to France Marin Raykov has been tipped as the most likely caretaker Prime Minister. Photo by www.bulgaria-news.bg

The brand-new Bulgarian caretaker Prime Minister, whose name is to be announced at 4 pm Tuesday, will represent Bulgaria at the European Council summit just two days later – on March 14.

The news was reported by the online news agency dir.bg, citing insider sources.

Last week, at the last sitting of the Cabinet, outgoing PM, Boyko Borisov, declared he will be the one traveling to Brussels.

The caretaker PM could attend the summit if the list of names in the caretaker Cabinet, appointed by President, Rosen Plevneliev, is published by then in an extra issue of the State Gazette.

Plevneliev said the Cabinet will start work as early as Wednesday, stressing it would be composed of men and women, who were self-made outstanding experts and persons.

Their motto is "for Europe, Democracy and Economic Advancement.

Until 4 pm, however, the names of these people remain only rumors.

Bulgaria's Ambassador to France Marin Raykov is been tipped as the most likely caretaker Prime Minister.

Raykov was born in 1960. He has a degree in international relations from the University for National and World Economy in Sofia. He started his career in the Foreign Affairs Ministry in 1987.

Raykov was Deputy Foreign Minister in the government of Prime Minister Ivan Kostov (1998 – 2001), after which he was appointed Bulgarian Ambassador to France, dnevnik.bg informs.

When Borisov's center-right GERB government assumed office, Raykov became Deputy Foreign Minister, but in 2010 he was yet again sent to France as Bulgarian Ambassador.

He is said to be currently in Sofia, but has declined commenting anything for the media.

Meanwhile, outgoing Education Minister, and former head of the Bulgarian Academy of Sciences, Stefan Vodenicharov, confirmed for the BTA news agency that it was true two professors will be members of the caretaker Cabinet, but declined offering names.

It is speculated that Vodenicharov himself is one of them and will keep the post of Education Minister. Another rumored name is the one of Prof. Ivan Stankov, President of the Thracian University, who would be Agriculture Minister.