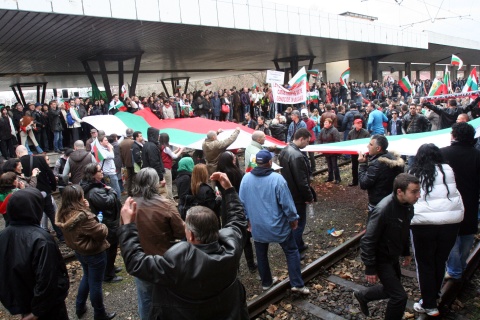 Protesters in Bulgarian capital Sofia, and in major city of Varna have blocked the cities' main railway stations to show their disapproval of the ongoing bid to privatize the freight unit of the Bulgarian State Railways (BDZ).

In Varna, ralliers have assembled on the 29th day of protests against economic stagnation in Bulgaria, and this time over blocked all exits from Varna's railway station.

In Sofia, protesters blocked the intersection of major Maria Luiza and Slivnitsa Blvds near the central railway station, and got down on the train tracks, blocking all of them.

People assembled in Varna are over 5,000, while those in Sofia number more than 1,000, according to media reports.

People are shouting out slogans such as "Mafia!" and are requesting a stop to the privatization procedure for BDZ Freight Transportation.

Opposers have argued that the debts are due to chronic mismanagement, and that the state will not profit from selling the Railway's cargo services, which are the company's more profitable unit.