Bulgarian Parliament's Declaration on 70th Anniversary of Rescue of Jews 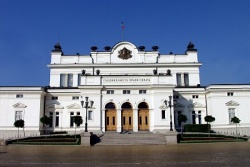 Photo by the Bulgarian Parliament.

We republish here in its entirety the Bulgarian Parliament's declaration, adopted unanimously in commemoration of 70 years since the rescue of Bulgaria's Jews in WW II, to be celebrated Sunday.

We, the people’s representatives of the 41st National Assembly of the Republic of Bulgaria are marking today the 70th anniversary of the rescue of the Jews of Bulgaria and pay our respects to the victims of the Holocaust.

The historic distance gives us an opportunity to evaluate the events in the history of Bulgaria in their fullness and multiple aspects. We are convinced that only such approach and position may stop the speculations and the untrue explanations of Bulgarian history and to give back for the contributions of the Bulgarian society and State towards the contemporary history of humanity and their values. Therefore we regard the salvation of Bulgarian Jews in 1943 as a remarkable event demonstrating the humanism and tolerance of the Bulgarian people and their will for justice.

At the same time we consider as inadmissible the passing of laws which restrict civil rights and create conditions for persecution, for economic and political repressions. For this reason we express our respect for those 43 members of the Bulgarian parliament, who together with the Deputy Speaker of the National Assembly at the time, Dimitar Peshev, in times of war and under treat for their personal safety and political future, had taken an open stand against the deportation of the Jews of Bulgaria.

Despite the pro-Nazi policies of the government of Bogdan Filov and the genocide held in Europe, Bulgaria gives an example of successful resistance to the attempts to exterminate Jews. Thanks to the efforts of the members of the 25th National Assembly, the firm position of the Bulgarian Orthodox Church and the active attitude of public figures and intellectuals, Bulgarian diplomats and professional organizations, of representatives of the official power and the movement against Hitler, of regular citizens and the behavior of the Jewish community, who perceived Bulgaria as its fatherland, the then head of the State, Tsar Boris III, concedes to the public pressure and refuses the deportation to the death camps of more than 48 000 Jews – Bulgarian citizens.

An objective evaluation of the historic events today could not ignore the fact of the 11 343 Jews deported from North Greece and the Kingdom of Yugoslavia, which were at that time under German jurisdiction. We denounce this criminal act, undertaken by the Hitler’s commandment and express our regrets for the fact that the local Bulgarian administration had not been in a position to stop this act. Nevertheless there were attempts on the part of Bulgarian citizens, clerics and public figures to rescue Jews. The member of the Bulgarian parliament, Petko Staynov, had moved to the National Assembly a proposal to change the Ordinance about Bulgarian Citizenship in an attempt to save the Jews from deportation by granting them an automatic Bulgarian citizenship.

Bulgarian diplomats issued visas for Palestine to Jews, coming from other European countries and thus save several thousand Jews.

Today we deeply mourn for all victims of the Holocaust, for each one of the deported Jews of the territories occupied by Hitler and express our deep respect for their memory. Their tragic fate should not be used for political speculations with present date.
As Members of the 41st National Assembly we decisively condemn all manifestations of xenophobia, anti-Semitism, religious and ethnic intolerance and adhere to their objection worldwide.

The Bulgarian society, and the young generation in particular, have the right to be proud with the rescue of the Bulgarian Jews. The message this act contains towards the contemporary society is for tolerance, goodwill and humanism between people from different ethnic groups, religion or culture backgrounds.

The respect for human rights and their enforcement is a mandatory condition for peace and progress and may not be subject of political compromise.