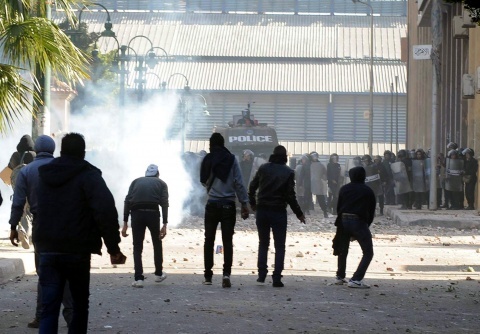 Egyptians face security forces during protests on the 2nd anniversary of the revolution in Alexandria, Egypt, January 25, 2013. EPA/BGNES

A court in Egypt has upheld 21 death sentences of fans over deadly football riots in Port Said last year.

Five of 52 other defendants were sentenced to life in prison for rioting while others received lesser sentences or were acquitted.

In February 2012, an Egyptian soccer game between top-tier teams al-Masry and al-Ahly turned in to a tragic nightmare, as clashes broke out after the final whistle leaving 74 people dead.

Locals accuse the Cairo court of leniency towards the police over the riots.

BBC further reports he court's verdicts, broadcast live on TV, were greeted with suspicion and anger in Port Said, local media reported. A crowd gathered thee to protest at the verdicts. Fans of the Port Said team, al-Masry, were also said to be planning a demonstration at the city's stadium.

The military has been patrolling the coastal city this weekend in an effort to ease tension.

Elsewhere, at least 10 of Egypt's 29 provinces were affected by an unprecedented strike by thousands of low-ranking police. Some units reportedly left their headquarters after sealing them with chains.

They were protesting against being forced by the government of Islamist President Mohammed Morsi to confront protesters as well as a lack of protection from prosecution.

The chief of security forces was replaced on Friday to try to defuse anger among police.

The court was sitting in the capital Cairo for security reasons. After the move to Cairo was announced, Port Said saw six days of clashes between police and protesters around the security headquarters. At least seven people - civilians and security officials - were killed.

There has been widespread antagonism towards the police since the mass protests which brought down former President Hosni Mubarak in February 2011.

Many people believe police in Port Said stood by in revenge for the fans' role in anti-Mubarak unrest. Police deny the accusation.