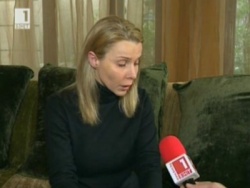 Monika Dobrinova is pictured here during her first and short public appearance since the abduction of her daughter Lara. TV grab by BNT

The former wife of alleged Bulgarian drug lord Evelin Banev aka Brendo has pleaded with the abductors of their daughter, begging them to call her on the phone.

Monika Dobrinova pleaded for her 10-year-old daughter's safe return on Friday in an interview for the state-owned TV channel BNT.

Addressing the abductors, she assured them she is ready to do everything they ask her and begged them to contact her.

"What happened was totally unexpected, we have never received any threats. If I was aware of this danger, I would have made sure that this does not happen.

"I want to appeal to the people, who abducted Lara, and tell them I just want to know whether she is alive and well, " said Dobrinova.

She explained that Lara is very vital and loving child and she certainly is going through hell now.

"She does not deserve this, she is just a child. I would do absolutely anything to get her back. For me, Lara was all. This is a nightmare, I trust neither the state nor the police. Please call me," Dobrinova said, turning once again to the kidnappers.

According to 24 Chassa (24 Hours) daily, if on Friday Brendo "behaves in the Milano courtroom as his business partners from Europe and South America are expecting from him," his abducted daughter could be back home as early as Saturday.

24 Hours also cites their own undisclosed sources saying Banev's silence before Italian magistrates is one of the main leads in the probe.

10-year-old Lara was abducted by masked gunmen at approximately 7:30 am on Tuesday in the affluent Sofia suburb of Boyana.

Banev and the others are charged with laundering over EUR 2 M using a personal account belonging to Konstantin Dishliev, owner of a firm called Private Finance Union, who was killed in 2005.