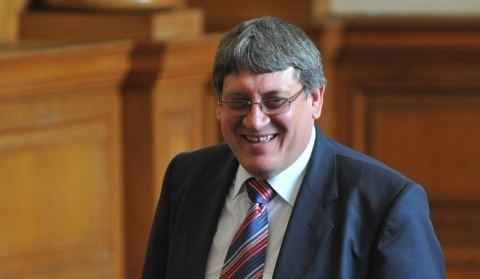 In March, 2012, Bulgarian ruling GERB party MP Plamen Tsekov was selected by the Parliament to become the next Head of Bulgaria's National Health Insurance Fund. Photo by BGNES

Bulgarian Member of the Parliament from the opposition, Maya Manolova, has accused the center-right GERB party of boycotting moving forward with improving healthcare in the country.

On Thursday, the Parliamentary Health Committee was supposed to hold a hearing of the Head of the National Health Insurance Fund, NZOK, Dr. Plamen Tsekov, over the demand for his resignation filed by the Doctors Union and the protest rallies of medical personnel against the new methodology for financing healthcare.

The meeting, however, was attended only by three MPs – Manolova and former Health Minister, Evgeni Zhelev, both from the left-wing Bulgarian Socialist Party, BSP, and Vanio Sharkov from the Blue Coalition.

The Chair of the Committee, Daniela Daritkova from the Citizens for European Development of Bulgaria party, GERB, adjourned to meeting over the lack of quorum, prompting Manolova to accuse GERB of boycotting it and of causing huge problems in the entire healthcare sector during their rule.

In the aftermath, Tsekov announced that hospital budgets would not be updated. Small corrections were only pending for some Sofia facilities which had largest reserves slated over technical errors. He stressed there was nothing fatal in this.

Doctors from various hospitals are complaining and alarming about up to 30% budget cuts for 2013. After an emergency meeting of the NZOK Supervisory Board, it emerged hospitals could up their planned budgets by 5%, however, without the update, the later would still end up being reduced by 20%-25%.

Despite all this, Tsekov is adamant the hospitals will keep working in the same manner, adding the non-existing conflict has been created on purpose amidst the euphoria of protest rallies in the country.

Dr. Tsvetan Raychinov, President of the Doctors' Union, counters the methodology from 2012 has not been reinstated and only some changes have been introduced.

"And even these changes becoming effective is problematic as all decisions of the NZOK Supervisory Board must be adopted by the government, which already held its last sitting, while the date for the appointment of a caretaker one remains unknown," said he, stressing doctors continue to demand Tsekov's resignation and are now planning their next move.

The center-right government of Bulgarian PM Boyko Borisov and his party resigned on February 20 amid unprecedented since 1997 protests against poverty, stagnation and corruption, with snap elections to be probably held May 12, just two months ahead of the regular date in July.