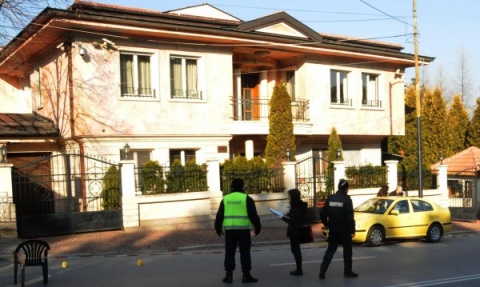 The home of Evelin Banev in Sofia. Photo by BGNES

Lara Baneva, the abducted daughter of alleged Bulgarian drug lord Evelin Banev AKA Brendo, is alive and kidnappers are hiding her in the capital Sofia.

The news was reported Thursday by Standard daily, citing insider sources from the investigation.

According to these sources, the mother Monika Dobrinova, has been already notified by the perpetrators the girl is doing fine. No one, however, has asked ransom and it remains unknown if there have been any other demands.

According to 24 Chassa (24 Hours) daily, if on Friday Brendo "behaves in the Milano courtroom as his business partners from Europe and South America are expecting from him," his abducted daughter could be back home as early as Saturday.

24 Hours also cites their own undisclosed sources saying Banev's silence before Italian magistrates is one of the main leads in the probe.

10-year-old Lara was abducted by masked gunmen at approximately 7:30 am on Tuesday in the affluent Sofia suburb of Boyana.