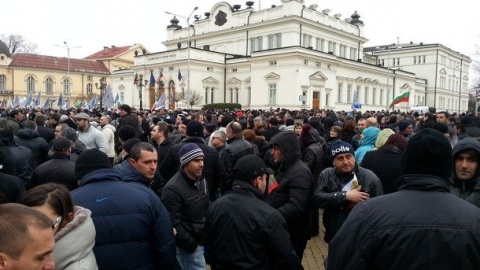 Demonstrating Bulgarians threaten civil unrest and permanent blockade of the Parliament as the outgoing MPs have failed to meet their demands in one of their last sittings in the current term. Photo by BGNES

Bulgarian Members of the Parliament refused Wednesday to deal with amendments to the Election Code, triggering outrage among people who have staged large-scale protest rallies in the country for weeks now.

Bulgarians, disgruntled and outraged by poverty, stagnation and corruption reigning in the country, staged earlier in the day a blockade of the building of the Parliament.

They pledge to stay until their demands are met.

The demands relate mainly to not dissolving the Parliament until it amends the Election Code to include: proportional ballots with unlimited preferences; decreasing the threshold to enter the Parliament from 4% to 3%; decreasing the number of required signatures to run at election to 500; decreasing the amount of the required deposit to be registered for the election to BGN 1 000 (from the current BGN 10 000); guarantees for equal and free access to public media during election campaigns and a mandatory "paid" warning for paid media appearances; ban on political advertisement in media and allowing debates only; civil quota in the electoral committees, both on central and local level.

Initially the demonstrators insisted on a majority ballot, but now have asked for the said preferential one, which gives voters the option and opportunity to rearrange the ballots of the political parties and allows voting for a certain person.

Upon hearing the news the MPs are not going to deal with election legislation, one of their leaders said: "They do not want us, citizens! They want their political class to keep reproducing. Are we going to allow this? NO!"

People, (about 100), rallying before the Parliament told reporters they have responded to a call to do so on social networks and pledged to show up again at 6 pm and relentlessly fight for their demands.

There are a total of 7 tents already erected near the Parliament's building.

Other demands include: revoking the licenses of concessionaires dealing with the extraction of non-ferrous metals, oil, and natural gas; revoking the decision of the Supreme Environment Council to expand construction of ski facilities in the Pirin mountain; moratorium on land sale and construction in Black Sea coastal areas; presidential guarantees for fair election process and civil control on those in power, along with reforms in the economy and the political model, while the Ombudsman is asked to reexamine the contracts of monopolies in the country.

Earlier, the MPs also refused to mandate the outgoing government to revoke the licenses of the power distributors. The proposal was made by the leader of the far-right, nationalist party Ataka, Volen Siderov, who left the sitting outraged by the refusal, calling the MPs "idiots."

Siderov asked the revocation on grounds the foreign-owned power utilities have systematically violated Bulgarian laws in artificially upping electric bills for consumers, distributing power with flawed parameters, concealing profits, and manipulating Bulgarian citizens, as the audit of the State Commission for Energy and Water Regulation, DKEVR, had revealed.

The Ataka leader joined the demonstrators outside briefly, asking them to remain united.

After nearly two-hour long heated debates and mutual accusations of who had "stolen most," the MPs also rejected the proposal of the left-wing Bulgarian Socialist Party, BSP, to impose a moratorium on land transactions and construction on Black Sea Coast beaches.

The center-right government of Bulgarian PM Boyko Borisov resigned amid unprecedented since 1997 protests on February 20, with snap elections to be probably held May 12, just two months ahead of the regular date in July.