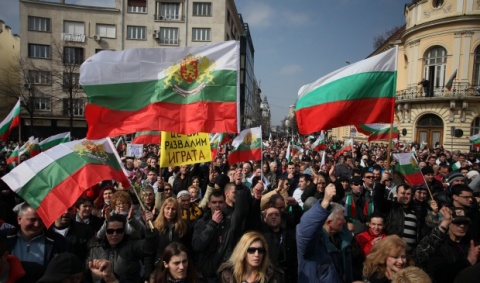 Bulgarians continue to rally against poverty, monopolies and politicians. Photo by BGNES

Bulgarians, disgruntled and outraged by poverty, stagnation and corruption reigning in the country, are preparing a blockade of the building of the Parliament.

They pledge to stage the blockade until their demands are met.

The demands relate mainly to not dissolving the Parliament until it amends the Election Code to include: proportional ballots with unlimited preferences; decreasing the threshold to enter the Parliament from 4% to 3%; decreasing the number of required signatures to run at election to 500; decreasing the amount of the required deposit to be registered for the election to BGN 1 000 (from the current BGN 10 000); guarantees for equal and free access to public media during election campaigns and a mandatory "paid" warning for paid media appearances; ban on political advertisement in media and allowing debates only; civil quota in the electoral committees, both on central and local level.

Initially the demonstrators insisted on a majority ballot, but now have asked for the said preferential one, which gives voters the option and opportunity to rearrange the ballots of the political parties and allows voting for a certain person.

Other demands include: revoking the licenses of concessionaires dealing with the extraction of non-ferrous metals, oil, and natural gas; revoking the decision of the Supreme Environment Council to expand construction of ski facilities in the Pirin mountain; moratorium on land sale and construction in Black Sea coastal areas; presidential guarantees for fair election process and civil control on those in power, along with reforms in the economy and the political model, while the Ombudsman is asked to reexamine the contracts of monopolies in the country.

In case these demands are not met, demonstrators threaten civil unrest and permanent blockade of the Parliament.

Many professional organizations such as those of medical personnel, taxi drivers, and miners among others, are also warning they are to continue their protests with their own demands related to their trade.