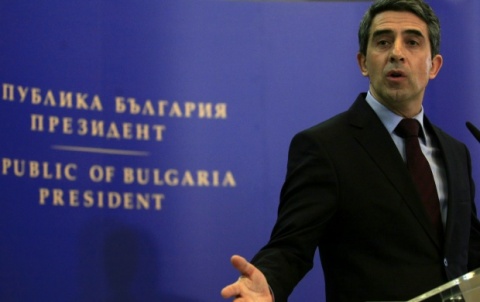 President, Rosen Plevneliev, is in Brussels to meet with EU leaders and to take part in the ceremony dedicated to the 70th anniversary of the rescue of Bulgarian Jews from Nazi concentration camps. Photo by BGNES

President, Rosen Plevneliev, is in Brussels Wednesday for the official ceremony dedicated to the 70th anniversary of the rescue of Bulgarian Jews from Nazi concentration camps.

Israeli President, Shimon Peres, will be present as well.

The political crisis in Bulgaria is also going to be discussed in Brussels by senior EU officials in the presence of the Head of State, who is there on a one-day working visit.

EC has already issued a statement it would not meddle in Bulgaria's home affairs. EU leaders are only expecting from the President information on the latest developments and on the political prospective.

The center-right government of Bulgarian PM Boyko Borisov and his GERB party resigned on February 20 amid protests against poverty and corruption.

The tribute to the rescue of Bulgaria's Jews during World War II includes an exhibit of documents from the country's archives, showcasing the courage and the solidarity of the public, the church, civic organizations, and politicians in not allowing deportation to the "death camps."

It is further reported that Peres is in Europe not only for the celebration, but to lobby before the EU to include Hezbollah in the list of terror organizations.

The above follows Bulgaria's recent report stating that the Lebanese organization may have been responsible for last year's bus bombing in the Black Sea city of Burgas.

Bulgaria's choice of whether to name Hezbollah as standing behind the terror act, which killed 5 Israeli tourists and their Bulgarian bus driver, has been seen as pivotal as to whether the bloc will officially label Hezbollah a terrorist organization.

Only two EU countries currently list Hezbollah as a terrorist organization—the UK and the Netherlands. The UK blacklists only the military wing of the Shiite organization.

Blacklisting the organization could allow regional authorities to clamp down on financial flows to the group and open the way for freezing assets linked to Hezbollah in Europe.

Bulgarian diplomats, however, have claimed the issue will not be on the Wednesday agenda of the Bulgarian President and his Israeli counterpart.