3 Activists Arrested in Moscow for Banner against 'Tsar Putin' 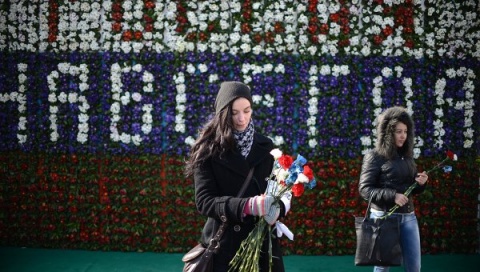 Flower wall in the Novopushkinsky public garden in Moscow built by an art group Lyudi (People). Photo by RIA Novosti

"Three people were detained for disturbing the peace in the central part of the city at around 1:00 p.m. (8 a.m. GMT), and were taken to a district police station to take administrative action against them," the police press service said, as cited by RIA Novosti.

The police did not say exactly how they "disturbed the peace" but Left Front leader Sergei Udaltsov wrote in his twitter microblog that the activists had chained themselves to a gate on the edge of Red Square and unfolded a banner reading "Down with Tsar Putin," to mark the first anniversary of the "false presidential election."

Earlier on Monday, an art group called Lyudi (People) built a flower wall in the Novopushkinsky public garden near City Hall with an inscription reading Rossia Navsegda (Russia Forever), to mark a year since Putin's election for a third presidential term and urging him to look after the country like a gardener looks after flowers.

On Monday morning, a 2.5-by-4 meter banner was put up on a building in central Moscow next to the Audit Chamber, carrying a likeness of Putin and reading: "We've Made the Right Choice!" and below: "For Putin!"

Police said the banner was removed and no-one was detained.