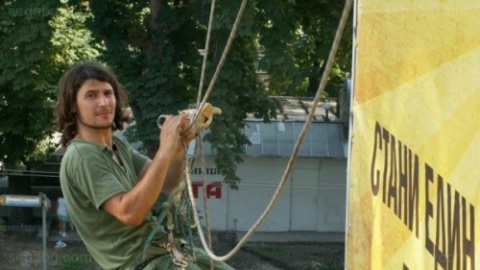 An avid mountain climber and photographer, Plamen Goranov, 36, died on Sunday after setting himself on fire to protest politics in Bulgaria. Photo by Facebook

Candle light vigils will take place in the Bulgarian city of Varna and in the capital Sofia in honor of Plamen Goranov, the man who set himself on fire as a sign of protest against Varna's corrupt authorities.

Some 600 Bulgarians have already confirmed their participation in the Sofia and Varna events on Facebook.

Facebook users have called for the erection of a monument in honor of Goranov in front of the Varna municipality.

Plamen Goranov, 36, passed away late on Sunday. He had set himself on fire in front of the municipality building in his hometown of Varna on February 20, just hours before Bulgaria's center-right GERB government resigned. He was carrying a poster demanding the resignation of Varna Mayor Kiril Yordanov and all of the city's municipal councilors.

Goranov has since become a symbol of the fight against the political system and the mafia in the country.

Kiril Yordanov was elected Mayor of Varna for his fourth term on the ballot of the Citizens for European Development of Bulgaria party, GERB. Claims and rumors have been circulating for a long time that he is serving the interests of the murky and powerful Varna-based group TIM.

In a secret cable, leaked through Bivol and WikiLeaks TIM was called by former US Ambassador in Sofia, James Pardew "the new leader in Bulgarian organized crime," and the "most modern form of organized crime" by investigative German journalist, Jurgen Roth.

On February 20, Prime Minister, Boyko Borisov made the stunning announcement he was resigning, grounding the decision on not wanting to see blood on streets and fences around the building of the Parliament. He said he was returning the power to the people who elected him in the summer of 2009.

The breaking news about Borisov's resignation came in the aftermath of large-scale protests across the country against high utility bills, leading to clashes with riot police.