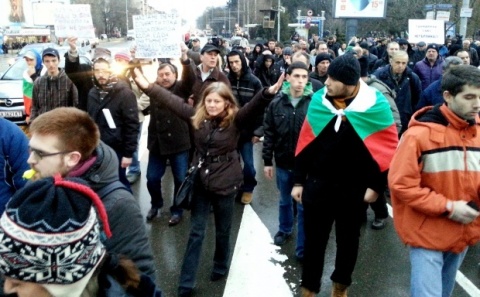 Hundreds of thousands of people are ralling in Bulgaria Sunday in another huge protest rally against monopolies, poverty and the political model of ruling the country. Photo by BGNES

Bulgarian protesters organized in a group under the name "Eagles' Bridge' have declared March 9 a day for "returning the State to the citizens."

They are calling a national conference on the same date. It will be held in Sofia's brand new multifunctional facility Arena Armeets and it will begin at 1 pm.

The choice of the expensive venue already prompted many to question who is actually going to pay the bill.

The demonstrators have also announced a permanent tent camp near the building of the Administration of the President until their demands are met. These demands are: convening a new Grand General Assembly, amending the Election Code, and a moratorium on bank foreclosures and assets freezes.

Thousands of people are blocking traffic on the key Eagles' Bridge intersection in the Bulgarian capital Sofia Sunday in another huge protest rally against monopolies, poverty and the political model of ruling the country.

Other demands include eliminating monopolies, a majority ballot, not adjourning the Parliament; the President appointing a program government instead of a caretaker one; drafting a Civil Participation Bill providing a 50% civil quota in all institutions; returning 51% of the shares of power utilities to the State; closing the Bulgarian Energy Holding, BEH, for draining the energy sector, establishing a procedure to recall Members of the Parliament.

In Bulgaria many of the procession pass by monuments connected to historical events to lay flowers.