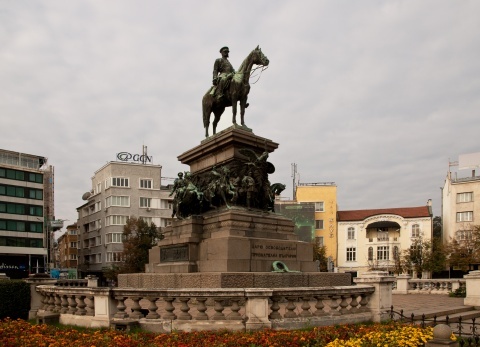 The Monument to the Tsar Liberator was erected in Sofia in honor of Russian Emperor Alexander II who liberated Bulgaria of Ottoman rule during the Russo-Turkish War of 1877-78. Photo by geolocation.ws

The repaired monument of Tsar Osvodboditel (Liberator King) in downtown Sofia is not going to be officially unveiled on Liberation Day as previously announced.

Standard daily writes Sunday the City Hall has cancelled initial plans to have the monument shown on the day Bulgaria celebrates the 135th anniversary of its independence from 5-centuries of Ottoman Empire rule.

Mayor of Sofia, Yordanka Fandakova, told the Bulgarian National Radio, BNR, what mattered most was the fact the sculpture's repairs have concluded successfully.

According to unofficial information, the opening is postponed for some date after May 12 when the country will hold a snap general election.

Meanwhile, the Chairman of the Construction Chamber, Svetoslav Glosov, noted three reasons for the delay: the political crisis; avoiding mixing the Liberation Day official ceremonies with the one for the monument, and the unavailability of the Chair of the Foundation which financed the restoration to attend on March 3.

In September 2012, the monument was temporarily removed from its location in front of the building of the Parliament to undergo full restoration, which ended in November.

In October, sculptor Velislav Minekov and art expert Lyudmil Veselinov, members of the newly formed Bulgaria for Citizens party, stirred a scandal by disclosing that the monument was abandoned in a backyard in the village of Trebich near Sofia, with no restoration work being performed on it.

The legs of the horse were replaced with new bronze ones due to the many cracks.

The project was implemented by the Bulgarian Construction Chamber with financial assistance from the Pokolenie (Generation) Foundation.

The entire sculpture – the horse and rider, Tsar Alexander II, was dismantled and sent to a shop near the capital Sofia. Bulgarian and Russian restorers were engaged for the works, along with a number of scientists. The sculpture was cleaned from the patina while the foundation was stabilized and also cleaned.

The Monument to the Tsar Liberator was erected in honor of Russian Emperor Alexander II who liberated Bulgaria of Ottoman rule during the Russo-Turkish War of 1877-78.

The Neoclassical memorial's author is Italian sculptor Arnoldo Zocchi, who won the project in competition with 31 other artists from 12 countries in the end of the 19th century. Bulgarian architect Nikola Lazarov participated in the monument's architectural design.

The foundation stone was laid on 23 April 1901, St George's Day, in the presence of Knyaz Ferdinand I of Bulgaria, and the monument was completed on 15 September 1903.

Erected of black polished granite from the nearby Vitosha Mountain, the monument consists of a pedestal, a middle part with figures and a massive Neo-Renaissance cornice finished with the sculpture of the Russian Tsar on a horse. The bronze wreath at the foot was donated by Romania in memory of the Romanian soldiers that died during the war.

The main bronze bas-relief in the middle part depicts a group of Russian and Bulgarian soldiers led by Nike, the Ancient Greek goddess of victory, who raises her sword high above. Portraits of Grand Duke Nicholas Nicolaievich, Count Ignatiev and the generals Joseph Vladimirovich Gourko and Mikhail Skobelev surround the group.

Other bas-reliefs feature scenes from the Battle of Stara Zagora, the signing of the Treaty of San Stefano and the opening ceremony of the Constituent National Assembly in Veliko Tarnovo, as well as portraits of prominent Bulgarian figures from the period.