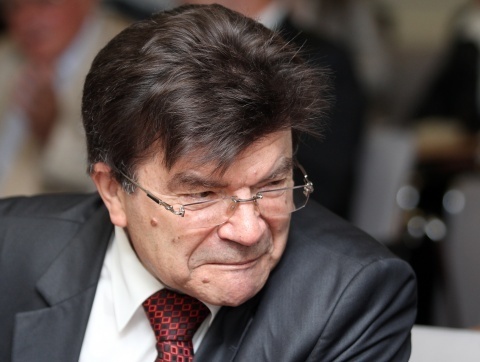 GERB nominated Grozdan Iliev, Deputy Chair of the Supreme Court of Cassations (VKS), has taken the oath of office as Constitutional Court judge. Photo by BGNES

After a five-month stalemate, Bulgaria finally has a functioning Constitutional Court.

Judge, Grozdan Iliev, who was elected in a hurry by the Parliament a week ago to fill the vacancy at the Constitutional Court, has taken the oath of office and has been released from his previous post of Deputy Chair of the Supreme Court of Cassations (VKS).

He was nominated by the center-right party Citizens for European Development of Bulgaria, GERB, whose cabinet resigned on February 21 amidst unprecedented since 1997 protest rallies against poverty, monopolies and the political model of ruling the country.

With Iliev joining in, the Constitutional Court can finally elect its Chair, which is expected to take place Monday.

The Court is the one that resolves claims against election results and for their recall.

The filling of the vacancy came after the notorious failure of the bids of judge Veneta Markovska and prosecutor Galya Gugusheva amidst accusations of shady practices, conflict of interests, and money laundering.

"I have never met or spoken with Prime Minister, Boyko Borisov," he declared Friday.

He also told the MPs he had started his career before the fall of the Communist regime in 1989 and admitted he has been at the time a member of the Bulgarian Communist Party, BCP, for three years.

He was adamant his reputation is clean and a war to discredit him is not to be expected. He noted, however, any public figure should be ready to be attacked.

Iliev was nominated by the GERB MP, Krasimir Tsipov, citing his extensive experience and impeccable reputation.

The vote on Iliev's nomination was scheduled for March 6. It was changed due to the shocking resignation of Borisov, and the fact Bulgaria is without a Constitutional Court since October, 2012.