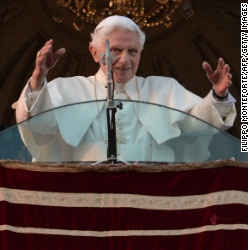 When he arrived at Castel Gandolfo, the papal summer palace overlooking Lake Albano south of Rome, the pope greeted a crowd of faithful and the local parish priest. Photo by Getty Images

Pope Benedict XVI has officially resigned, saying that he now "will simply be a pilgrim" starting his last journey on earth.

Pope Benedict XVI left Vatican City Thursday for the last time as leader of the billion-member Roman Catholic Church, heading by helicopter to his summer residence where he spent the last hours of his pontificate before stepping down.

When he arrived at Castel Gandolfo, the papal summer palace overlooking Lake Albano south of Rome, the pope greeted a crowd of faithful and the local parish priest.

Benedict then appeared at a window overlooking the public square in Castel Gandolfo to bless a cheering crowd.

"Thank you very much for your friendship," Benedict said.

"I will simply be a pilgrim who is starting the last phase of his pilgrimage on this earth.

"Let's go forward with God for the good of the Church and the world."

Some in the crowd were in tears listening to what could be Benedict's final public words as pope.

Then, at 8 p.m., the pope's resignation - the first of its kind in six centuries - took effect.

Earlier in the day Pope Benedict XVI vowed "unconditional obedience and reverence" to his eventual successor.

He was speaking on his final day in office at the Vatican to his cardinals, one of whom will be elected next month to replace him.

"I will continue to serve you in prayer, in particular in the coming days" as the cardinals work to select a new pontiff, he said.

Benedict told the cardinals it was a "joy to walk with you" during his eight years as pope.

That includes both cardinal-electors, who are under the age of 80, and cardinals who are not eligible to vote for the next pope.

Not all those eligible to vote were present, said Vatican spokesman the Rev. Federico Lombardi.

The final number of cardinal-electors has not been confirmed but is thought to be 115.