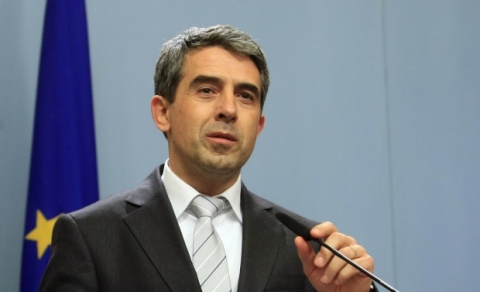 Bulgarian President, Rosen Plevneliev, says in the aftermath of large-scale protests, all actions of the institutions must focus on preserving social peace. Photo by BGNES

Snap election is the only remedy for preserving democracy and national security, according to Bulgarian President, Rosen Plevneliev.

Plevneliev spoke Tuesday evening after the conclusion of the five-hour-long emergency sitting of the Consultative Council for National Security, KSNS, at the Office of the President, stating the participants have reached concrete solutions and made decisions to achieve national consensus in taking into account the just protest of Bulgarians and to counter the ensuing escalation of tensions.

KSNS was summoned as last Thursday Bulgaria's Parliament approved the resignation of the government of Prime Minister, Boyko Borisov, and his ruling Citizens for European Development of Bulgaria party, GERB, amidst unprecedented since 1997 protest rallies against unbearable utility bills, monopolies, and wide-spread poverty that turned into a civil unrest against the political model of ruling the country.

Some of the decisions include a moratorium on all land deals on the Black Sea coast and measures to regulate electric power prices, he explained.

The Parliament will have a plan with legislative changes to be adopted before its adjourning.

The President, however, declined giving a concrete date for the snap election, only saying it would be revealed "soon."

"I am fully aware of the huge responsibility on my shoulders and this is way we make decisions every day in order to respond to public issues. They will not be swept under the rug and solutions will be sought together with citizens," said he, adding some of the demands of the demonstrators were feasible, and others not.

On Wednesday, he will give the mandate to form an interim government to the second largest group in the Parliament after GERB – the Bulgarian Socialist Party, BSP, which is expected to be turned down.

Then, on Friday the mandate will go to the ethnic Turkish party, Movement for Rights and Freedoms, DPS. The party has already declared they refuse to participate in an interim government.

GERB already turned down the mandate, meaning Plevneliev will have to appoint a caretaker government, schedule snap election, and adjourn the Parliament.

There are strong disagreements among different groups of disgruntled people, but some of the demands that have emerged so far are: moratorium on the December 2012 utility bills, until proven legal; not adjourning the Parliament; the President appointing a program government instead of a caretaker one; drafting a Civil Participation Bill providing a 50% civil quota in all institutions; returning 51% of the shares of power utilities to the State; closing the Bulgarian Energy Holding, BEH, for draining the energy sector, summoning a Grand General Assembly, establishing a procedure to recall Members of the Parliament.

Meanwhile, the Member of the Parliament from the right-wing Blue Coalition, Mihail Mihaylov, was quoted saying off-the-record, KSNS has made the decision to hold the snap election on May 12.