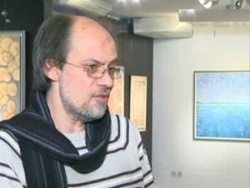 Bulgarian Lyubomir Hristov is one of the top Hollywood visual effects artists. Photo by BTA

Bulgarian visual effects artist Lyubomir Hristov has won an Oscar for being part of the team working on the "Life of Pi" motion picture.

The movie, which grabbed 3 Oscars, features the story of a young man who survives a disaster at sea, to be hurtled into an epic journey of adventure and discovery. While cast away, he forms an unexpected connection with another survivor - a fearsome Bengal tiger.

In addition to visual effects and best director, Life of Pi also picked up an Oscar for cinematography.

The Bulgarian artist is connected with the visual effects of movies such as "Avatar," "The Matrix," and "Pirates of the Caribbean."

Nearly 1 million people have watched Sunday the glamorous ceremony for the 85th edition of the Oscars awards, held at the Dolby Theater in Los Angeles.