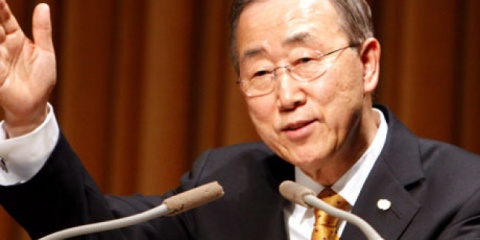 The Bulgarian government's press office has been exposed in altering the official statement of the UN Secretary General Ban Ki-moon on the occasion of the resignation of Bulgarian Prime Minister, Boyko Borisov.

The site OFFNews reports they have inquired with the UN if it is true that in a phone call the Secretary General had voiced hope Borisov will lead the country for another term, and had praised him for the wise and effective rule of Bulgaria, as the government press office has claimed.

Ban Ki-moon's spokesperson has sent the following email in response:

Martin Nesirky
Spokesperson for the Secretary-General"

Meanwhile, the site Pogled.info published an email exchange on the same issue between journalist Daniela Zagorcheva and Ban Ki-moon spokespeople. Both Martin Nesirky and the other spokesperson, Farhan Haq, had sent the same reply as the one to OFFNews.

In addition, Farhan Haq has written the following to Zagorcheva: "The story is not accurate. The Secretary-General made a personal call to Prime Minister Borosov and wished him well but did not express any view about his political future."

Both have given the journalist permission to quote them in the media.

It was reported on Friday that the government's press office has also edited the official statement of UK Prime Minister, David Cameron, on the occasion of the resignation of his Bulgarian counterpart.

However, several hours later, the British Ambassador in Sofia, Jonathan Allen, wrote the following on Twitter: "It's perfectly normal for each side to put out their own statements after a conversation. Shows what each side focuses on," and "Lots of nonsense around on PM statements. To be clear, we do not disagree with anything in PM Borissov's statement. It is accurate."