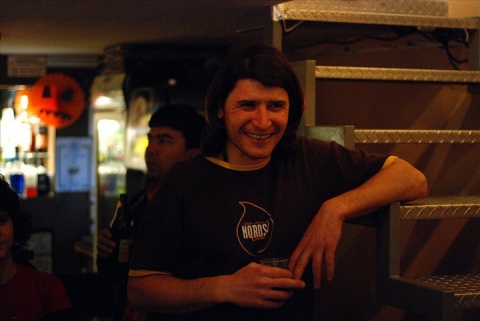 Avid mountain climber and photographer, Plamen Goranov, who set himself on fire to protest politics in Bulgaria, had his own business where he used his skills to insulate outside walls. Photo by Facebook.

An employee of the City Hall of Bulgaria's Varna has found and taken away a poster definitely disclosing the man who set himself of fire just hours before the resignation of the Cabinet "Borisov" had demanded the ousting of the local mayor.

The spokesperson of the Varna Prosecutor's Office, Desislava Yotova, has confirmed the information for the Dnevnik online news agency.

Plamen Goranov, 36, set himself on fire a little after 7:30 am Wednesday in front of Varna's municipality. A meeting against Varna politicians and unbearably high utility bills gathered thousands of demonstrators later in the day.

Eyewitnesses say they heard the man screaming as the flames overcame him "Kiro, Kiro, today I had to be in Antalya." They tried to help him with a fire extinguisher and called the 112 emergency hotline.

Goranov is listed in the Naval Hospital and remains in critical condition with 80% burns on his body. He has also sustained severe lung damage and is on induced coma. The doctors are not very optimistic about the outcome.

Several hours after the tragic incident, rumors began spreading quickly that the man was carrying the said poster, demanding the Mayor's resignation, and that the poster quickly disappeared as citizens were busy helping the victim.

The Prosecutor's office spokesperson told the Dnevnik correspondent in Varna, Spas Spassov, the authorities learned about the poster from the media and their first search failed to locate it since none of the questioned policemen and municipal employees seemed to know anything about it. However, on February 20th, the last interrogated witness has mentioned that such poster had been found at the scene and the ensuing search discovered it with a municipal employee. The prosecution has seized the poster which reads: "Resignation of Kiro and all municipal councilors by 5 pm on February 20, 2013."

Yotova further disproved other initial claims of the police and the investigation that Goranov has been accidently harmed as he tried to set a dummy of Kiril Yordanov on fire. She reported that two bottles of gasoline – 10-liter and 5-liter – have been found at the scene. Eyewitnesses say Goranov poured gasoline on himself from the smaller bottle. No dummy or remains of it have been found on the scene. In addition, only his feet don't not have burns, again according to Yotova, who stressed all evidence corroborates the lead he set himself on fire on purpose.

Goranov's blood tests did not reveal any alcohol or drug content, disproving another initial police lead that he was a junkie.

According to the prosecution, on January 17th, when the largest, 30 000-strong protest took place in Varna, Plamen told a friend that he was pessimistic the rallies will lead to anything substantial, adding the following: "I better set myself on fire," but the friend had not taken it seriously.

On February 19, he has declared before the same friend he was no longer going to take part in the protests and was planning to leave for Antalya (Turkey) to practice his hobby – mountain climbing.

The friend further told the prosecutors Goranov had become extremely emotional about politics and active, even radical, in society after enrolling to study at the Economy University in the Danube town of Svishtov.

The prosecution's case is for "incitement to suicide."

In addition to being an avid mountain climber, Goranov is a photographer and had his own business using his mountain climbing skills to insulate outside walls.

He has been single and his mother has passed away.

"We are sheep, and Kiro is our shepherd," and "We are going hunting for Kiril Yordanov," are the last two things Goranov has written on his Facebook profile, the site for investigative journalism Bivol.bg further informs.

"My wife and I are in shock since now, when we saw the pictures, we recognized him. During the protest march, we were walking close to him and started a conversation. He was carrying a poster against TIM and the Mayor. He was desperate and told us he keeps his electric power on for 2 hours and turns it off for 2 hours in order to save money for food, and money was very short. At the end of the meeting he took the microphone and said that we must sweep TIM and Kiril away," a rally participant has written on Facebook.

"Plamen is one of us. He had always had a great sense of humor; he was funny, cool, interesting, smiling, and daring. No one knows what made him do this, but I know he always wanted a clean city and nature, an intact Sea Garden. He wanted freedom," a friend has written on Facebook.

Many in Bulgaria have already compared Goranov to Jan Palach and Mohamed Bouazizi.

A blood donation action for him is ongoing in Varna. Those wishing to donate must go to the blood transfusion center of the St. Anna hospital in the city. Doctors say anyone can donate, regardless of the blood type. Many – friends and citizens have already flocked there led by the desire to help Plamen.

Kiril Yordanov was elected Mayor of Varna for his fourth term on the ballot of the Citizens for European Development of Bulgaria party, GERB. Claims and rumors have been circulating for a long time that he is serving the interests of the murky and powerful Varna-based group TIM.

In a secret cable, leaked through Bivol and WikiLeaks TIM was called by former US Ambassador in Sofia, James Pardew "the new leader in Bulgarian organized crime," and the "most modern form of organized crime" by investigative German journalist, Jurgen Roth.

On Wednesday, Prime Minister, Boyko Borisov made the stunning announcement he was resigning, grounding the decision on not wanting to see blood on streets and fences around the building of the Parliament. He said he was returning the power to the people who elected him in the summer of 2009.

The breaking news about Borisov's resignation came in the aftermath of large-scale protests across the country against high utility bills, leading to clashes with riot police with many injuries and vandalismat some places.